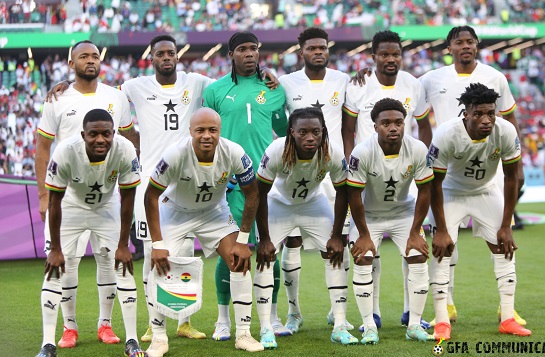 The Black Stars have climbed-up three places to 58th on the latest Men's FIFA/Coca-Cola World Ranking following their participation in the FIFA World Cup Qatar 2022.

The Stars were ranked 61st - the lowest of the 32 teams that participated in the Mundial ahead of the tournament hosted by Qatar.

The Black Stars are the 11th-best team on the African continent per the ranking.

Morocco, who are 11th in the global ranking following a fourth-place finish at the World Cup are the highest ranked in Africa, followed by Senegal, Tunisia, Cameroon and Nigeria.

A new champion in Argentina (2nd, plus 1) was crowned the FIFA World Cup Qatar 2022, but that did not stop Brazil (1st, - ) from staying out front in the last FIFA/Cola-Cola World Ranking of the year.

The Seleção hold a narrow lead over La Albiceleste, who would have jumped ahead of their neighbours and rivals had they beaten France (3rd, plus 1) in last Sunday’s World Cup final in normal or extra time.

Losing finalists, France may have lost their world crown but they are back in the top three. Dropping out of it is Belgium (4th, minus 2) after they failed to reach the knockout phase at Qatar 2022. England (5th, - ) completes the top five.

On the back of their respective runs to the last four of the World Cup, Croatia (7th, plus 5) and Morocco (11th, plus 11) have both made spectacular jumps up the Ranking. The Atlas Lions are the year’s highest climbers, in fact, having collected no fewer than 142 points over the last 12 months.