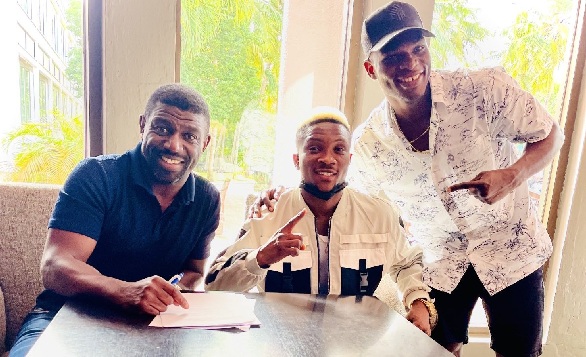 Wahab, who has been training under Charles Quartey in Ghana, joins Ghanaian fighters Richard Commey and Emmanuel ‘Gameboy’ Tagoe as boxers under DiBella Entertainment.

The undefeated super featherweight boxer has been fighting of Accra, Ghana since finding love in boxing at the Charles Quartey Boxing Club at Timber Market in Accra.

In an interview with the Daily Graphic after his signing, Wahab said he was ready to understudy stable mate Richard Commey whom he shares the same management.

“I want to thank my manager for bring Lou DiBella on board to help push my career and I promise him I will never disappoint him,” said Wahab.

Meanwhile, Amoo-Bediako has called on Wahab to take inspiration from Commey by taking up his chances when the time comes for him to fight.

He explained that Wahab could only achieve his dreams if he will take up the opportunities that come his way.

“He has a lot of potential and that is why we signed him on. We have decided to bring on Lou DiBella to take up the promotional aspect and I can tell you that he is in good hands.

“It is now up to him to prove himself when the fights come and that is what he needs to get to the top and achieve his dreams of becoming a world champion,” Amoo-Bediako told Daily Graphic.