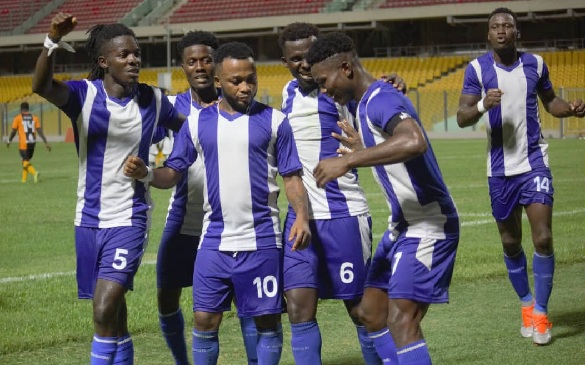 Premier League giants, Kumasi Asante Kotoko, suffered their first Premier League defeat of the season after losing by a lone goal to Accra Great Olympics at the Accra Stadium on Thursday.

Michael Yeboah scored his third goal of the campaign after 53 minutes to hand Olympics a narrow win in Accra.

The attacking midfielder connected a fine cross by inspirational skipper Gladson Awako to ensure the Wonder Club come out as victors.

In a very fierce contest, the first half ended goalless with no clear-cut chances for either team.

It was Kotoko who were forced to make the first substitution of the day in the 35th minute after Patrick Asmah picked up an injury.

After the recess, both teams opened up in search for a win. On the 54th minute, the Wonder Club took their chance to take the lead through a Yeboah header from an Awako cross.

Awako had outwitted his markers and then sent an incisive cross which Yeboah headed into the net to hand his side a precious victory.

The Porcupine Warriors pressed for the equaliser but a resolute Olympics defence ensured Olympic’s second win of the season.

The victory takes Olympics to the fifth position on the table while Kotoko dropped to 11th.