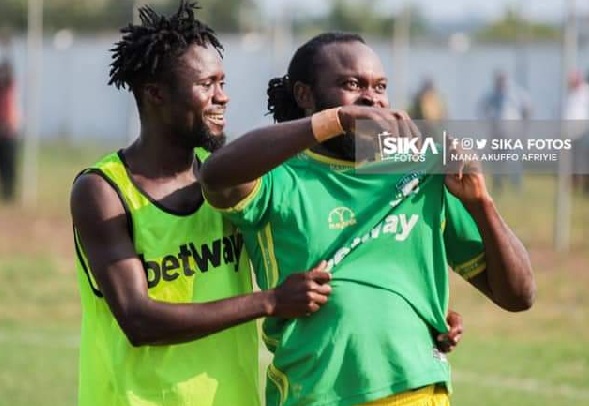 Aduana Stars put up an impressive performance yesterday to dismiss visiting Hearts of Oak 2-0 in their match day one outstanding Ghana Premier League encounter at the Nana Agyeman Badu I park.

Target man, Yayaha Mohammed, made good his promise to score against Hearts by capitalising on a defensive lapse to snatch the opener in the 43rd minute.

Before the Phobians could recover, Prince Acquah doubled the lead for the homesters with a long drive after 46 minutes to ensure a relieving lift from the bottom of the table.

At Obuasi, Ashantigold went on rampage with a humiliating 5-1 thrashing of visiting King Faisal in their Week 3 outstanding match.

Isaac Opoku Agyemang shot Coach Milovan Cirkovich’s side ahead in the 16th minute but the Miners’ jubilation was shortlived by Kwame Peprah’s equaliser in the 27th minute.

After recess, Opoku Agyemang hit a brace to increase Ashgold’s tally to 3-1 after 48 minutes.

The Miners never looked back afterwards as they probed for more goals which finally arrived through another brace by winger Yaw Annor in the 83rd and 90th minutes.

Meanwhile, Asante Kotoko will clash with Accra Great Olympics in their third week outstanding league match at the Accra Stadium.

After clearing the Olympics hurdle today, Kotoko will engage Dreams FC in another tough sixth week battle at Dawu on Saturday.

At the Accra Stadium next Wednesday, Kotoko will then play host to Al-Hilal of Sudan in a CAF Champions League first round first leg match, before honouring their fourth week outstanding match against Medeama SC at Tarkwa next Saturday, December 27.