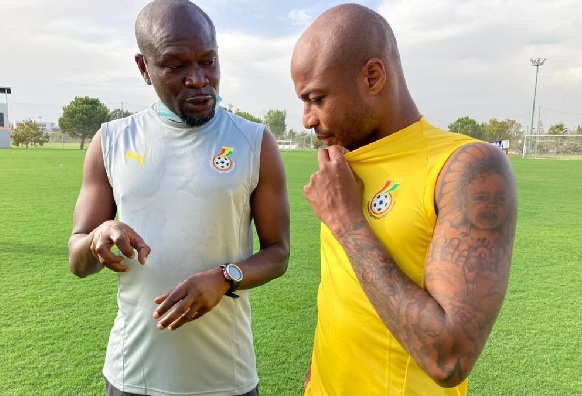 BLACK Stars Skipper, Andre Ayew, and Coach Charles Akonnor have identified the national team's inability to create and score goals as an area that needs urgent attention and work ahead of their 2022 FIFA World Cup qualifier against Ethiopia in September.

Ayew observed that for the team to make their fourth World Cup qualification a reality and also excel at next year's Africa Cup of Nations tournament, the team must address their inability to score in recent matches.

The Stars failed to score in their two recent international friendly matches against Morocco and Cote d’Ivoire. Ghana lost 0-1 in Rabat to the Atlas Lions of Morocco last Tuesday before playing out a goalless stalemate with the Elephants of Cote d’Ivoire last Saturday in Cape Coast.

After last Saturday's match, Ayew hailed Coach Akonnor’s drive behind the team and described his work on the team as a fantastic. However, he admitted that the lack of goals was his biggest concern.

“The coach has done a fantastic job with the team, the preparation of the squad you could see the drive behind it. So now, we need to make sure that all what we are doing is to create chances to be able to score more goals against Ethiopia,” Ayew said.

The midfielder noted that the national team was progressing steadily but cautioned that their encounter with Ethiopia must be won at all cost if they were to commence the qualifiers on a bright note.

“Solid performance, tough game; we wanted to win at home but we didn’t get it. It was a 50-50 game, but I think we showed a lot of determination, good play, they were very dangerous at set pieces but we were able to handle them

“We are still progressing but now we have to get ready for Ethiopia because that is a must win game,” he said.

Coach Akonnor shared in Ayew’s concern and called on his forwards to start firing. He warned that he could be forced to fish out for strikers that would score to win him matches.

He said the only way to win matches was to have clinical players wants to focus on improving the team’s attacking area.

“We still have a lot to improve in our attacking area,” Coach Akonnor said, adding that “If there is anybody out there that is good to bang in the goals we will hand him a call-up. But for now, we will have to work on those available because without goals you can’t win a match.”

Ghana will begin their 2022 World Cup qualifying campaign against Ethiopia and the former Swansea forward said their results against Morocco and Cote d’Ivoire were not inspiring enough ahead of their next competition match in September.

The Black Stars continue struggling in front of goal with the team's forwards failing to score in recent times.

In their last seven matches (friendly and competitive) since October 2020, Akonnor's side have found the back of the net 11 times and conceded eight goals.

While lead striker, Jordan Ayew, has a goal in his last four matches, the captain Andre Ayew appear to be their leading goal scorer with four goals and the rest spread among defenders Nicholas Owusu and Baba Rahaman, offensive midfielders Samuel Owusu and Mohammed Kudus, and forward Caleb Ekuban.