Andre Ayew: We will go through despite Morocco's defeat 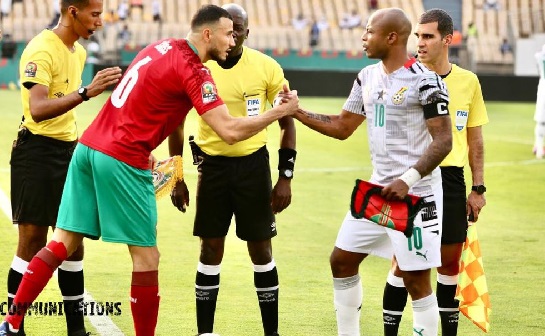 Black Stars skipper, Andre Ayew is confident Ghana will make it to the knockout stage of the ongoing 2021 Africa Cup of Nations (AFCON) despite losing their opening game to Morocco at the Stade Ahmadou Ahidjo on Monday.

Ayew explained that the Stars were unlucky to concede in the final minutes of the game against the Atlas Lions and believes they will positively respond in their second match against Comoros on Friday.

Ghana lost by a lone goal to Morocco at the Stade Ahmadou Ahidjo in Yaoundé after lack of concentration helped striker Sofiane Boufal to give his side an important win against the Stars.

Speaking in a post-match interview, Ayew said the team was ready to learn from the defeat to ensure they win their next two games against Gabon and Comoros to qualify from Group C.

“I am confident we will go through to the next stage of the tournament and I don’t think there is doubt about that. We are disappointed for conceding such a goal but we have to keep working hard for the next match against Gabon.

“We will learn from our mistakes in this game and make sure we don’t repeat them going forward. This is not going to be easy but we will surely go through,” he noted.

Coach Milovan Rajevac’s side were on course to earn a deserved point from the game before Boufal scored to hand Ghana a defeat in Yaoundé.

The defeat means Ghana have lost consecutively to North African sides – Algeria and Morocco -- in their two previous games.

The Stars were thrashed 3-0 by Algeria in a pre-AFCON tournament before losing by a lone goal to Morocco in their opening AFCON game.

Ghana must beat Gabon in their next game to stand a chance of making it to the next stage of the competition.