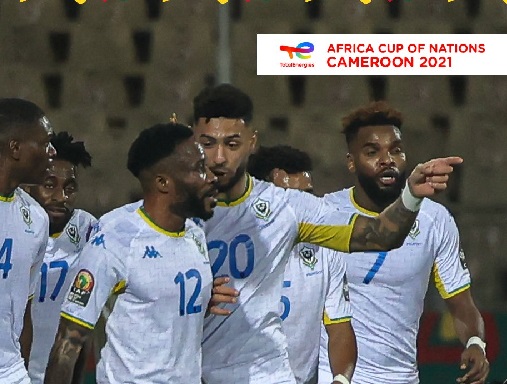 A lone goal by Aaron Salem Boupendza was enough to help Gabon defeat Comoros in the second Group C match of the TotalEnergies Africa Cup of Nations 2021 played on Monday evening.

Gabon who played the match without their usual star skipper Pierre-Emerick Aubameyang made their intentions known from the start of the match at the Ahmadou Ahidjo Stadium in Yaounde, Cameroon.

The Panthers made several attacks at goal in the first 10 minutes, but it was Boupendza’s 17th tight angled strike that made the difference.

The Comoros defenders failed to clear away a long cross, giving Boupendza the chance to run in the box and blast the ball in the roof of the goal past goalkeeper Ahamada Ali Nadhoim.

After 22 minutes Comoros pushed forward but failed to make use of their attack. The Panthers’ Jim Emilien Ngowet Allevinah continued causing difficulty for the Comoros team with his quick dribbling skills.

In the second half the Comoros coach Amir Ed Dine Abdou pushed his players forward as they looked more composed creating more opportunities at the Gabon goal.

But it was Gabon that almost scored again after 71 minutes, but Athanase Dennis Bouanga’s close shot was parried away for a corner by the Comoros’ goalkeeper Ahamada Ali Nadhoim.

The Comoros team did not not give up as substitute Djoumoi Moussa had a shot punched back into play by the Gabon goalkeeper Jean Noel Amonome.

The two teams continued to create scoring opportunities, but the final punch was lacking.

Gabon’s win sends them to joint top in Group C with Morocco who earlier stopped the Black Stars of Ghana by the same 1-0 margin.