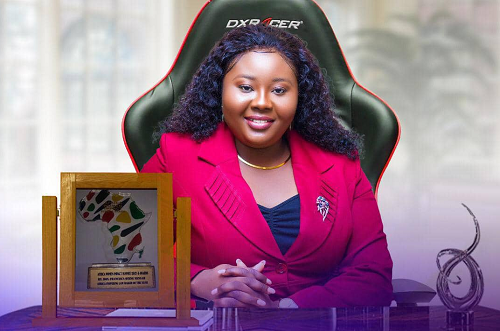 The Member of Parliament (MP) for Kwabre East Constituency in the Ashanti Region, Miss Francisca Oteng-Mensah, has been recognised by the African Women Impact Summit as Africa’s (AWIS) Most Inspiring Lawmaker of the year 2021.

The award was in recognition of her sterling performance and commitment to transformational leadership in her role as an MP.

The award ceremony took place at the weekend in Abuja where the crème de la crème of women in Africa were recognised for their role in the development of the continent and also for providing inspiration for other girls.

In 2016, Miss Francisca Oteng-Mensah became the youngest MP at age 23 on the ticket of the New Patriotic Party and won with the highest votes.
Her hard work and impact in the constituency ensured that she got a resounding victory for a second term.

The citation which accompanied her plaque reads: “You have raised the profile of young people across the African Continent and your story and achievements must be used to inspire more people.”

Receiving the award, Miss Oteng-Mensah expressed gratitude to AWIS for the recognition and the honour done her.

She said over the years, she has received various awards, “but this is one of the prestigious awards received this year. I’m grateful to AWIS”.

Gradually, she said women were changing the narrative and becoming the movers and shakers of society and “our innovation and compassion allow us to be great leaders and inspire the next generation to reach greater heights than ever before.”

She encouraged her fellow young women and youth at large, “to be inspired to do more to make Africa a better place. Once again, I say thank you for the recognition”.

The year’s AWIS 2021 was on the theme “The Africa we want – Inclusion, leadership capacity and influence; The role of women in Africa’s economic and Political future.”

AWIS aims at harnessing, validating and amplifying the contributions of African women and their diasporan counterparts in Africa’s growth, security and prosperity.

Its goal is to help expand the African affairs workforce, advance women’s leadership in the workplace, and promote the critical role of the diaspora in Africa’s development.