Persons campaigning for 'NO' referendum vote are hypocrites - Freddie Blay 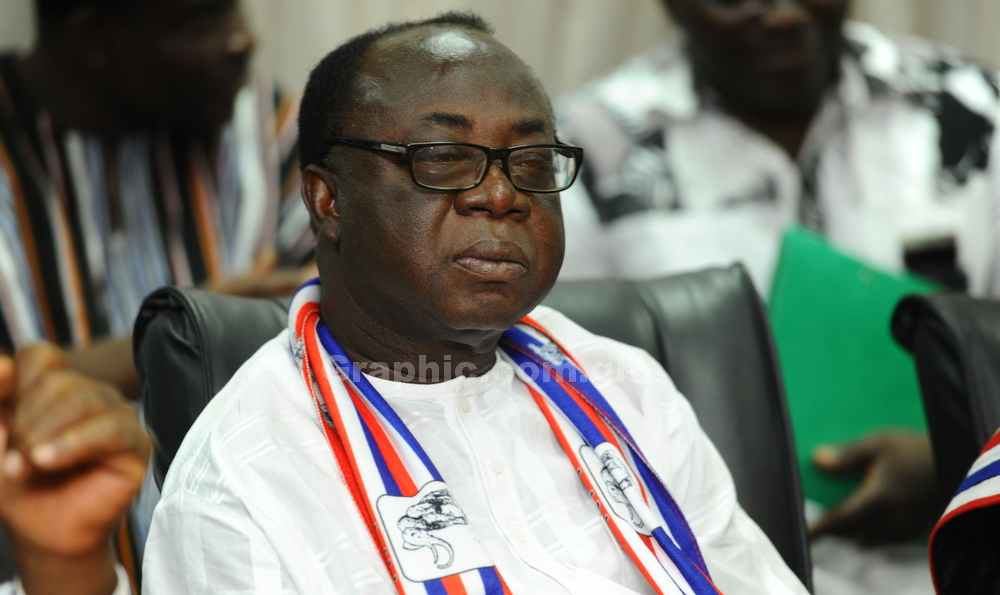 In a radio interview on Accra based Asempa FM on Wednesday afternoon [November 27, 2019], Mr Blay argued that local level elections have always been political clandestinely and that President Akufo-Addo was only seeking to make it legal.

But if other people are campaigning otherwise, and the President decides to take a step back, that will be okay but it would be a "pity."

"I think the president [Akufo-Addo] is a person who listens, it may even be painful and he will say that for now, if people are saying so, I may reconsider that, I don't know but that is the President and his Cabinet. If they decide that, the party itself has decided that let's go the full hog, its a good idea, even if we go and 75 per cent do not vote for us and about 60 per cent do, to me its a victory," Mr Blay said in the live radio interview monitored by Graphic Online.

Asked about what his advise about the referendum will be for the President, Mr Blay said:

"Its leadership, leadership is not just deciding to go on with what you think you are convinced about in certain cases, sometimes you listen, and say I wish I will go this way but if the people in this country say it's not just right for me to move ahead of you..., I will later on come back to it, its a pity, I will miss my fufu maybe today, but actually that is one of the good things that the President of the Republic has come out with it. I [Freddie Blay] was so glad over it and I think it is so good, some of us who believe in democracy, who believe in partisan involvement in the management of this country, of course some people say that party politics sometimes have a little problem here and there but they say that democracy may be a very bad government except that it has no other alternative."

Asked for a clearer answer on what his advise will be on whether the referendum should be withdrawn or go ahead Mr Blay said, "I will reserve that [answer] for now but it will be painful for me, and I feel very sad... as I said this is very listening president, he will listen to people and quite a number of people, very well placed have come out with that, some have done it very nicely, others have crudely done it without any, to the point of almost being confrontational but maybe they have not thought of it very well, they've not looked at it, analyse it."

"But as I said, the only analysis that I have listen to from the other side is what Ofosu Ampofo came to sit here and I felt sorry and said oh! is that all, is that what we want, you are talking about there must be repeal of some other Articles and I say these are all consequential or related Articles, 248, 246 and so forth and so on. It will be worked out so that it will give good essence and good substance to allow the idea of allowing political parties to participate."

Mr Blay agreed that the present situation on the ground indicates that a 'YES' vote in the referendum might be difficult but he insisted he will rather go for the political party participation in local level elections.

"I will rather go for the political parties because we may be giving lip service, it's hypocrisy to the zenith point, being hypocrisy, that's what I'm saying, what do you mean by that, how do we even go to canvass. look if me I want to go and canvass for a position, a member of the district assembly in the community and so forth, definitely I will get some people to campaign for me, I won't go from household to household, I can't do that, this is not a Greek Republic where all of us will gather at one place and then we will do it that way. The society is a bit sophisticated now, population has increased and for that matter, you'll need some kind of organisation to back you, whereby it will sensitise opinions and make it good and somehow political parties has the capacity to do that now. But if people want to say that they want to vote without political parties, its chaos that they want, they don't want organisation..."

"I will agree if the President decides with his Cabinet, maybe we take time again and do a little more engagement to persuade the NDC people, the younger ones, not their leadership, not the old people who themselves don't want change, Ahwoi and co, they won't change, they belong to the old order, brilliant people in the party, yes, but the idea of saying that don't get political people involved in it, I think is outrageous."

Touching on Professor Kwamena Ahwoi's credentials in local governance and the fact that he is a "don" in the area and therefore his position of a 'NO' vote which is said to have greatly influenced the NDC leadership to change their position from a 'YES' vote to that of 'NO', Mr Blay said: "that's what people say, but I definitely poopoo it, I say, the idea belongs to the old order. Its a dinosaur, so please this one, they've never believed in political parties anyway from the beginning, they belong to the coup legacy, they prefer to come to power through coup and want to maintain the power because they have been forced to now to agree that we should do party politics. Present yourself to the people for accountability sake, for people to vote for you, to agree with you that either they like you or not.., if they don't like you they vote you out based on the political manifesto and policies.programmes that you presented to the people and that is exactly what the NPP has done under Nana Akufo-Addo."

Reiterating his stance on the credentials of Prof Ahwoi, Mr Blay added: "Look I am saying that, that is not true, brilliant old man now, I knew him he was my senior in school, being a lecturer, an appreciable man, but from day one I have disagreed with him on that and he knows it. I have argued, I remember we were in Legon... and I said I prefer voting. We were also talking about the hybrid thing and I said I don't go for the hybrid thing [Westminster type/Parliamentary], we go for presidential but of course I was not part of it but to me it was a mischief to have inserted that political parties should not be allowed to partake in local government elections. It was not good from day one and now we are looking at using 75 per cent, 40 per cent to hang their coat on it and be proud that they won't agree.

On the argument by the Minority Leader in Parliament, Mr Haruna Iddrisu that President Akufo-Addo has no power to halt the referendum and that even though the executive through the sponsoring Minister can withdraw an amendment Bill before Parliament at any time before it is passed, same cannot be said if the amendment process travel or proceed beyond the remit of Parliament

Article 290 of the 1992 Constitution, clause 4 states that after the Bill has been read the first time in Parliament, it shall not be proceeded with further unless it has been submitted to a referendum.

Mr Iddrisu argues that any attempt to subject the amendment Bill to any further Parliamentary proceedings or processes before a referendum is held will be unconstitutional.

Responding, Mr Blay said he has not taken a closer look at the various Articles but if the Minister in charge [Local Government and Rural Development] for one reason or the other is convinced that she needs to take a second look, what is the purpose to say you just want to go with it, for defeat or for humiliation...but if listens to people and say I thought it was based on consensus and we've debated to the extent that it's reached this stage and you've turned round and so I'm taking a second look at it, I believe if I look closer at the various relevant Articles in consultation, there would be a way out.