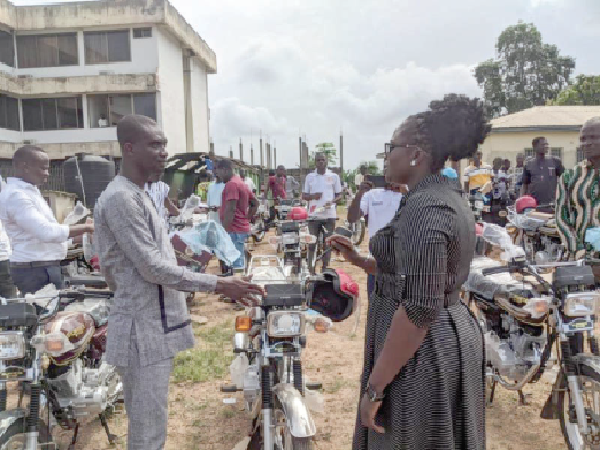 The Assin South District Assembly has presented 37 motorbikes to members of the assembly to ease the transportation challenges they encounter while attending assembly meetings.

The District Chief Executive (DCE) for Assin South, Mrs Felicia Amissah, who handed over the motorbikes to the assembly members at a short ceremony at the forecourt of the assembly, said it would assist them in their duties in their respective electoral areas.

She narrated the ordeal some of the assembly members go through to secure means of transport to attend meetings.

"The transportation crisis due to the bad nature of some roads in the district is disrupting attendance to assembly meetings and thereby impeding the development of the district", she noted.

Mrs Amissah said aside from trekking long distances before getting any means of transport, the exorbitant transport fares, due to the bad road network in some communities was also a challenge.

She said the intervention would go a long way to address the challenges and charged the assembly members not to sell the motorbikes, but rather license, insure and use them for the intended purpose for which they had been given to them.

The DCE cautioned the assembly members to ride the motorbikes with extra care and use the helmets that come with them always to protect them.

The Presiding Member, Mr Emmanuel K. Boadi, asked the beneficiaries not to use the motorbikes for Okada business but make good use of them in their communities to promote and develop the agenda of the district.

For her part, the assembly member for Assin Edubiase, Mr Aaron Owusu, expressed appreciation to the assembly on behalf of his colleagues.