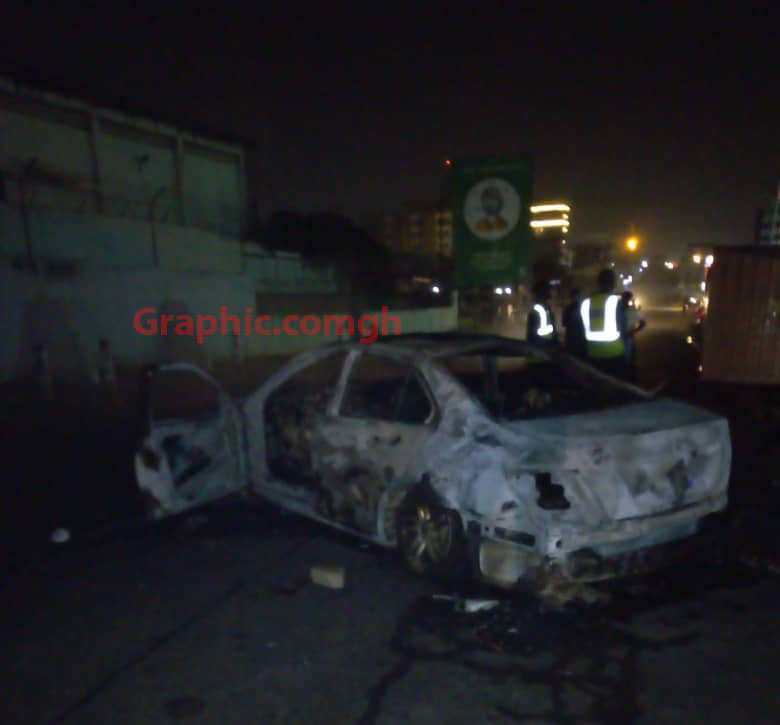 Three persons got burnt to death when the Mercedez Benz saloon vehicle they were travelling with was involved in an accident on the Spintex road in Accra.

One passenger from the Benz was however rescued and currently in critical condition at the LEKMA Hospital.

The driver of the Mercedez Benz vehicle reportedly ignored warning signals of an earlier accident on the road and run into a 20 footer container that had fallen unto the road.

Police personnel were present at the scene directing traffic and were supervising the removal of the container from the road when the second accident occurred and resulted in the death of the three persons.

The police explained that they got information about the earlier accident on the Spintex Road and moved personnel from the Okpoi-Gonno District to control vehicular traffic at the accident spot.

The police explained that when they moved to the accident scene, all the three vehicles were at the resultant positions and investigations revealed that the suspect driver, Cyril Lartey was in charge of the DAF truck which was loaded with a 20FT container and was heading towards the Palace Mall from Manet junction.

According to the police, on reaching a spot near Fashion City Furniture, the driver of the truck reportedly lost control and run into the two other vehicles and caused damage to them.

The container fell on the road and whilst the police were directing traffic and the National Road Safety recovery truck was about to move the container from the road, a driver in charge of a Mercedez Benz saloon car with four persons on board, reportedly ignored all the warning signals and crashed into the container, the police said.

The Benz caught fire and with the assistance of the Fire Service personnel, police managed to rescue one passenger.

However, three occupants in the Benz were burnt to death.

The bodies have since been deposited at the Police Hospital in Accra.

The driver and one other occupant are in critical condition at the LEKMA Hospital.