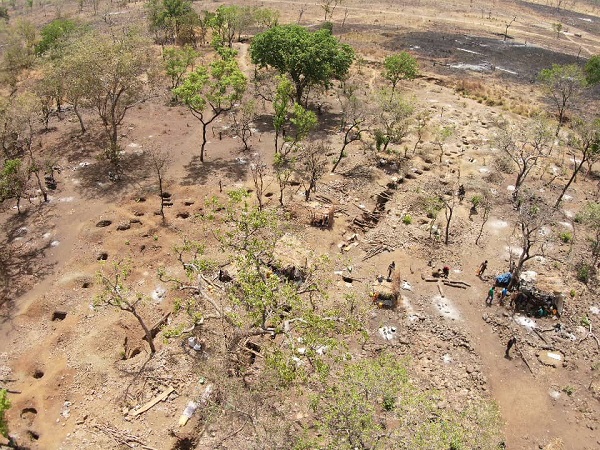 Aerial view of some portions of the forest

Illegal miners have invaded forest reserves in the Sissala East and Kesena-Nankana municipalities in the Upper West and Upper East regions and destroyed the vegetation cover.

Along the western enclave of the Ghana-Burkina Faso border, the illegal miners have caused massive destruction to the environment, causing a major threat to wildlife in the western corridor, a habitat that hosts the Mole National Park in Ghana and the Nazenga Game Reserve in Burkina Faso.

The corridor also facilitates the seasonal movement of wildlife between the two wildlife parks in West Africa.

The Daily Graphic gathered that the illegal miners, who are said to comprise both locals and foreigners, have been mining in the areas for the past four months with impunity and calling the bluff of leaders in the communities and environmental activists.

Some of the illegal miners at the Pudo site

During a visit to the areas last week, the Daily Graphic observed that the illegal miners had caused massive destruction to forests in Pudo, Wuru and Kayoro, communities in the Sissala East and Kasena/Nankana municipalities.

They were seen busily mining deep inside the forests. They had cut down a large number of trees and cleared pathways through the forests to facilitate their mining activities. At the Pudo forest, for instance, a large tract of land had been laid bare.

With the land progressively being deprived of vegetation to protect it against the vagaries of the weather, one can imagine the level of erosion that would take place when it rains.

The Sissili River, which is the main source of water for farming and for drinking for both human and wildlife, is also under severe threat of drying up as it has become heavily polluted through the activities of the miners.

In an interview with the Daily Graphic, the Paramount Chief of the Banu Traditional Area, Chrajuri Niti, said in 2008 and 2012, the community rejected applications for mining in the area but illegal miners had, in spite of that, found their way into the forest.

He said last year illegal miners stormed the Pudo Forest Reserve, which is managed by the Forestry Commission, and destroyed parts of the forest.

“Fortunately, the government task force on galamsey swiftly flushed them out of the forest” he said.

Chrajuri Niti added that since then the miners had pitched camp around the edges of the forest reserve and the off-forest areas and were mining with impunity.

“There are many sacred groves in the area, which are of traditional significance and which also have potential for eco-tourism, so we want the government and the relevant agencies to act swiftly and flush out these illegal miners from the area to protect the environment,” he said.

The destruction caused to the forest by the illegal miners

The Sissala East Director of the Forestry Commission, Mr Samuel Dwomo, said his outfit was aware of the presence of illegal miners but they had been flushed out and the commission currently had the forest secured.

“Even though we have flushed them out of the forest reserve, they are still operating in the off-forest areas where we don’t have the capacity to engage them. We can only do so with the help of the galamsey task force,” he said.

Mr Dwomo has also called on the relevant authorities to urgently move in and clamp down on the illegal mining activities going on in the area and help protect the environment from further destruction.

The Forestry Commission estimates that about 6.6 million hectares of Ghana’s 8.2 hectares of forest trees have been depleted over the years through indiscriminate human activities.

Currently, the country’s remaining forest cover of 1.6 million hectares is threatened by illegal mining and lumbering, and other human activities.