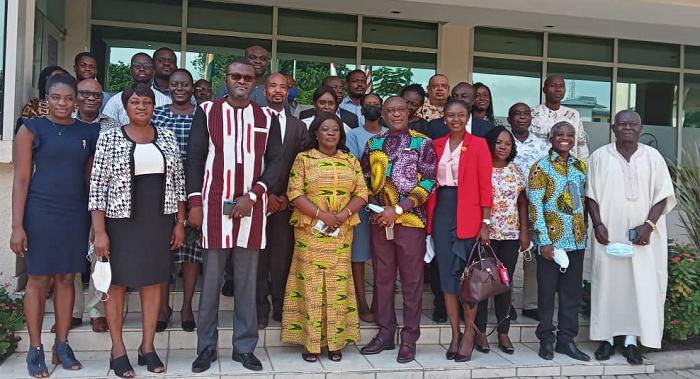 The Executive Director of the Environmental Protection Agency (EPA), Dr Kwabena Henry Kokofu, has noted with concern that the overexploitation of mangroves for fuelwood and settlement development along coastal communities in the country is rapidly altering the habitat and reducing the resilience of coastal ecosystem.

For him, due to the rapid destruction of mangroves, coastal ecosystem can no longer provide environmental services, including erosion control and habitat for spawning and nursery of juvenile fishes.

He explained that anthropogenic activities such as illicit dumping of solid and liquid waste, reclamation of wetlands for development projects, shoreline erosion as well as climate change have all contributed to the degradation of coastal resources.

Dr Kokofu speaking on the sidelines of a three-day national consultations for the review of action plans for the additional protocol to the Abidjan Convention with Graphic Online on Tuesday, July 6, 2021 in Accra, expressed worry that shoreline erosion, for instance, had impacted on habitats for marine turtles and tourism while a number of coastal habitats “have been eroded by invasive species, particularly sargassum species which is plaguing most West African countries.”

The Abidjan Convention is a legal tool for cooperation in the protection and development of the marine environment and coastal region of the West, Central, and Southern Africa.

The Convention within its framework, coordinated the development of additional protocols for the region, which was adopted in 2019, and further developed action plans to operationalise the protocols by respective countries.

For Dr Kokofu, it was necessary that immediate actions are taken to halt the rapid destruction of coastal ecosystems in the country and other West African countries in order to help sustain the livelihoods of the several coastal dwellers.

“…these happenings in our coastal environment are of great concern and it is important we all contribute to ensuring that the coastal and marine resources are sustainably managed,” he said, adding “We are all aware of the importance of the coastal zone to the socio-economic development of human kind and the ecological and environmental services it provides.”

Touching on the three-day National Consultations on Action Plans for Additional Protocols to the Abidjan Convention, Dr kokofu expressed the hope that “the action plans will engender coordination and synergise policies, regulations and initiatives in member states and strengthen governance in the management of shared resources.”

The Chief Director of the Ministry of Environment, Science, Technology, and Innovation (MESTI), Mrs Cynthia Asare Bediako, said the country had benefited considerably from signing onto the convention, particularly in the areas of capacity building, strengthening in coastal zone management, and the development of Ghana’s Oil Spill Contingency and Coastal Sensitivity Atlas, management of invasive weeds.

For her, “the Abidjan Convention Region is among one of the highly productive and diverse ecosystems that support fisheries, coastal tourism, industries, minerals, ports, oil extraction” and needed the cooperation of all the member states.

She has, therefore, pledged Ghana’s commitment to the course of the Abijan Convention, saying Ghana remains committed to the course of cooperating in protecting and managing our collective shared marine and coastal resources within the region.”

Mrs Asare Bediako added, “We welcome the action plans developed to support the implementation of the Abijan Protocol.”