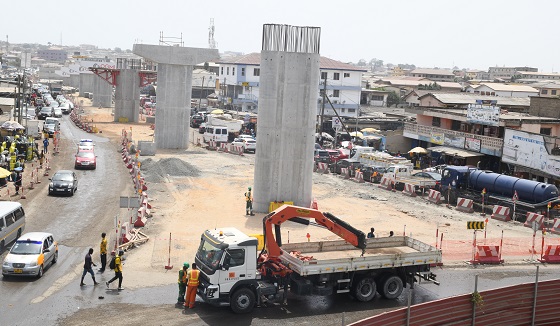 Work on the second phase of the Obetsebi-Lamptey Interchange project is progressing steadily.

The second phase, which is a third-tier flyover stretching from the Awudome Cemetery to the Abossey Okai Central Mosque, will ensure the smooth movement of motorists from the Nkrumah Circle towards Korle-Bu.

Other works involve underground storm drains from the Hyundai stretch of the interchange to Mpamprom, near Kaneshie.

When the Daily Graphic visited the site on Thursday, March 3, 2022, the Resident Engineer for the project, Mr Owusu Sekyere Antwi, said it was 45 per cent complete.

Construction workers were busily working on one of the abutments (the thick pillars on which the descending or ascending deck will lie) and also the pier caps, which is the bearing holding the deck.

Majority of the excavation works and foundation for the abutment had been done, with workers building the abutment walls with precast concrete.

There were also earth-moving equipment levelling the foundations for the abutment walls, as well as water tankers that were sprinkling water on the road to reduce dust levels at the site.

“Currently we are constructing the bridge itself, the piers and the second abutment. We have 10 piers in total and we have completed eight of them; we are left with the pier caps of the remaining two. We are also at the final stage of Abutment Two; Abutment One has been completed,” Mr Antwi noted.

Workers busily working on one of the abutments of the project. Pictures: Emmanuel Quaye

“After the construction, they will begin with road works as the next stage of the project,” he added.

Mr Antwi noted that the first tier of the project, which included the existing roundabout, would be remodelled and maintained. 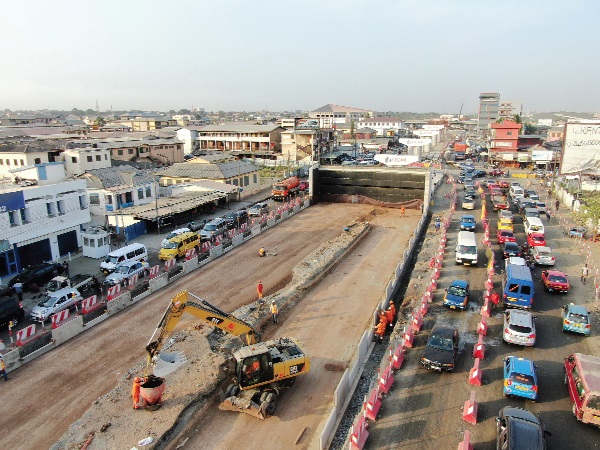 An aerial view of the second phase of the Obetsebi-Lamptey Interchange. Pictures: DOUGLAS ANANE-FRIMPONG

He expressed confidence that the project would be completed in March 2023, as scheduled.

Touching on some concerns expressed by those affected by construction works, the resident engineer noted that although the management undertook regular watering of the road, it would increase the frequency to reduce the dust levels on the road.

He further noted that compensation processes had already started, adding that properties that were affected were marked last year and the valuation process was ongoing.

He advised residents and business owners to desist from littering and throwing rubbish into the drains, as that prevented water from flowing freely in them.

“What we have realised is that the drains moving towards Korle Bu are choked, and most of the time the material in them is empty water sachets. Residents and business owners must avoid littering their surroundings and throwing rubbish into the drains,” he said.

Construction of the second phase of the interchange started in February 2021.

The first phase was completed in November last year, five months ahead of schedule, and it involved the construction of the second tier interchange from the Graphic Road towards Kaneshie; east to west.

It also involved the construction of two (5 x 2 metre) 550-metre viaducts and ramps between the Graphic Road and the Dr Busia Highway (Kaneshie-Mallam Road).

The Obetsebi-Lamptey Interchange project is being executed by QG Construction Limited of the UK, with FAS Consult Ltd as consultants.