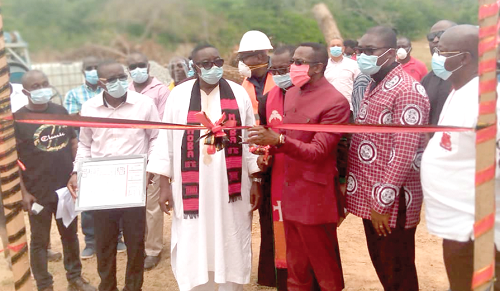 Mr Kwamena Duncan cutting the sod for the commencement of the project. Looking on are the headmaster, Rev Aidoo (left) and other dignitaries Follow @Graphicgh

The Mfantsipim Old Boys Association (MOBA) has cut the sod for the construction of a GH¢1 million ultra-modern basketball court complex for the school.

The court has its own seating area, two changing rooms and washrooms.

The Chairman of the 2020 Sponsoring Year Groups Steering Committee, Brigadier General Joe D Prah, noted that despite the challenges brought about by the COVID-19 pandemic, the year groups were determined to complete the project and hand it over by November.

He said the project was expected to enhance the school's participation in competitions and help produce more excellent sportsmen for the nation.

The Central Regional Minister, Mr Kwamena Duncan, commended the old boys for the support towards the school and particularly, the Ebusuapanyin for his direction for the school.

The president of the 1990 year group, the lead sponsoring group, Mr David Abbey, pledged the commitment of the groups to the prompt completion of the project and urged all to cooperate for the project's successful completion.

The Headmaster of the school, Rev. Ebenezer Aidoo, thanked all who contributed to the development of the school especially the old boys and the government of Ghana.

He especially commended government for four projects currently ongoing in the school, two classroom blocks and two dormitories for the school but appealed for support for washrooms for the dormitory blocks which would take about 1,500 students.

He appealed for support for the schools National Science and Maths team and for more teachers’ bungalows.

The Ebusuapanyin, Captain (rtd) Paul Fordjor, for his part, thanked the sponsoring year groups for the immense teamwork which had resulted in the project being commenced saying such efforts were certain to put the school where it should be.