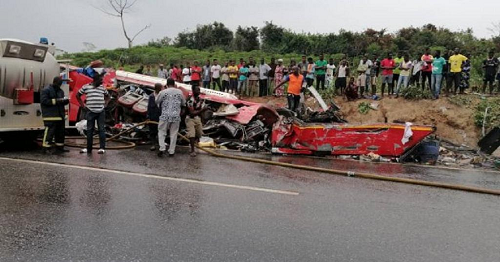 The figures, according to the Director-General of the National Road Safety Authority (NRSA), Mrs May Obiri-Yeboah, were higher compared to the figures for the same period last year.

She made this known at the NRSA’s engagement with journalists in Accra yesterday on how to ensure safety on the country’s roads.

It formed part of NRSA’s ‘Arrive Alive’ campaign, which was aimed at ensuring zero accidents on the country’s roads.

Mrs Obiri-Yeboah said despite the high cases of road accidents, there had been a 17.61 per cent reduction in pedestrian knockdowns within the same period.

She mentioned, however, that males remained most vulnerable to road traffic casualties as they formed 81 per cent of the crash victims.

“More than 50 per cent of crash victims who die and suffer severe injuries are within the productive age bracket of 18 and 55. This has economic consequences for their families and the nation at large. While we advocate better roads, 70 per cent of the crashes occur on the flat straight roads,” she said.

Mrs Obiri-Yeboah, therefore, called on drivers to justify the licence they possessed by driving carefully and professionally.

“Let us observe the speed limits, reduce our speed in town to allow for pedestrian usage of the roads,” she said.

The director-general also advised pedestrians to look out for safe crossing facilities such as pedestrian crossing points and footbridges before crossing the road.

She said motorbike riders were expected to ride safely by wearing helmets, avoid needless manoeuvring while looking out for pedestrians, and not violate the red lights at traffic intersections.

She called on the media to carry out public education to sensitise the public to prevent more road accidents in the country.

Mrs Obiri-Yeboah said the authority was teaming up with the media to roll out the “Arrive Alive” mass media campaign scheduled to be launched on October 1, 2020, in Takoradi.

She added that the authority had also reached out to 841 bus terminals, 48 churches, 21 mosques and 326 communities, and appointed 30 road safety inspectors to help improve institutional responsibilities, among others.

The President of the Ghana Journalists Association (GJA), Mr Roland Affail Monney, called on the media to leverage their power as journalists to become crusaders against the carnage on the roads.

The Deputy Director of Programmes of the NRSA, Mr Daniel Wuako, named indiscipline on the roads, laxity and irresponsibility of key stakeholders as some of the main causes of road accidents.