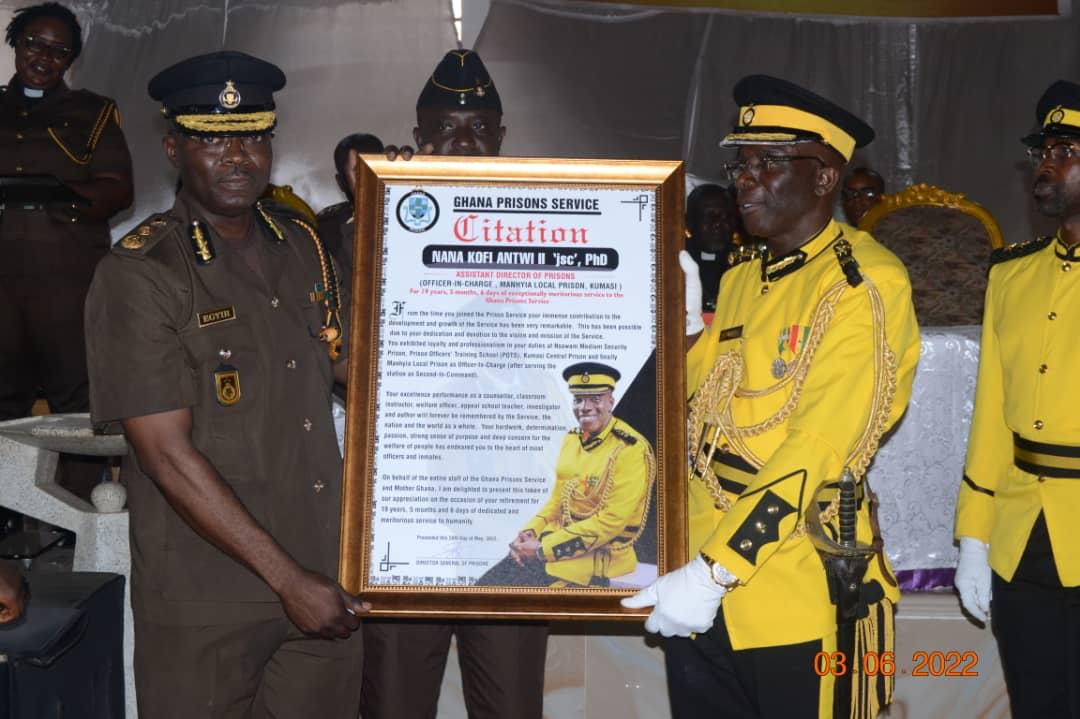 A pull-out ceremony was held at the weekend in honour of Nana Dr. Kofi Antwi II, Assistant Director of Prisons, who was in-charge of Manyia Local Prisons in Kumasi .

He retired from active service at the age of 60.

Nana Dr. Kofi Antwi is also the Asante-Akyem Odumasehene and the Nifahene (right wing) of the Juaben Traditional Area in the Ashanti Region.

The first phase of the pull-out ceremony was held at the Asawasi Methodist Church where Pastor Newman Osafo Adu Amankwa, the Kokofu District Pastor of the SDA Church, delivered the sermon.

Later, Nana Dr. Kofi Antwi inspected a guard of honour at the Manhyia Prisons and sat in an open car where prison officers lined-up at the sides and he was pulled out through the principal street of Manhyia.

His position as Manhyia local head has been taken by ADP Joseph Asabere, a former Second In-Command at the Koforidua Local Prisons.

In a citation, the Ghana Prisons Service commended Nana Dr. Kofi Antwi for his immense contributions to the development and growth of the service which he described as very remarkable.

“This has been possible due to your dedication and devotion to the vision and mission of the service,” the citation stated.

He had his elementary education at Breman-Brakwa and Atwima-Techiman from 1969 /1978 respectively.

He continued his Sixth Form Secondary education at the Wenchi Secondary School from 1986-1988.

When completed the Sixth Form he taught at Atwima-Gyekye Methodist JSS where he taught Mathematics and Technical Skills.

He gained admission to pursue Bachelor of Education in Psychology and Diploma in Economics in 1990-1994.

After five years in secular employment, he had the opportunity to pursue MPhil in Guidance and Counseling at the University of Cape Coast.

He pursued further studies at the University of Cape Coast distance education programme where he pursued Post-Graduate Diploma in Organization Development from 2010-2014.

With keen interest in reaching the pinnacle, Nana Kofi Antwi II passed a competitive interview at the now Akenten Appiah-Minkah University of Skills Training and Entrepreneurial Development in Kumasi to pursue a Doctor of Philosophy degree in Educational Leadership.