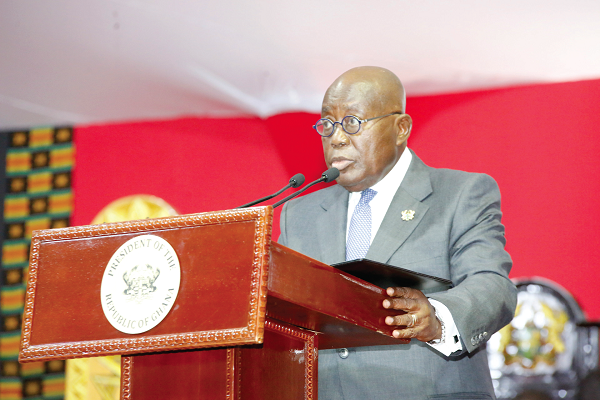 President Nana Addo Dankwa Akufo-Addo has expressed the confidence that the Executive and Legislature, guided by their relationship, will work together in the interest of the people to ensure good governance in the affairs of state.

He has, for his part, given assurance of his determination to work with the Legislature to achieve the desired results.

“I want to assure you of my wholehearted determination to work with you to advance the peace, progress and prosperity of the Ghanaian people,” he said.

Delivering his inaugural speech after taking and subscribing to the oath of allegiance and the Presidential oath at a ceremony on the precincts of Parliament in Accra yesterday, President Akufo-Addo said the make-up of the eighth Parliament of the Fourth Republic made it obligatory for the Executive and the Legislature to co-operate with each other.

“Together, you and I will be charting new territory in the governance and politics of the Fourth Republic, for this is the first time in the life of this Republic that a President from one party will be obliged, by the exigencies of the moment and the will of the people, to work, in all sincerity and co-operation, with a Speaker of Parliament from another party,” President Akufo-Addo said.

Yesterday’s inauguration, which took place in a tent sited on the precincts of Parliament and which served as a temporary Chamber of Parliament, saw President Akufo-Addo and Vice-President Mahamudu Bawumia take the oath of allegiance and the Presidential oath and that of the Vice-President, respectively.

Despite some restrictions imposed by issues surrounding the COVID-19 pandemic, the event attracted a number of African Heads of State and people from all walks of life.

Scripted not to last beyond two hours once it began, the ceremony was devoid of the elaborate fanfare that characterised similar events in the past, but it had all the aura of importance.

Among the guests were 13 African Presidents, including Cote d’Ivoire’s Alasanne Ouatara, Faure Gnassingbe of Togo and Roch Marc Christian Kaboré of Burkina Faso.

The President of Guinea, Professor Alpha Conde; President Macky Sall of Senegal and President George Weah of Liberia were also in attendance.

While expressing his appreciation to Ghanaians for renewing his mandate, President Akufo-Addo said he did not take the opportunity to serve a second term for granted.

“Following in the exalted footsteps of former President Jerry John Rawlings and President John Agyekum Kufuor, who served two successive terms in office, I cannot, therefore, take this honour and privilege bestowed on my modest self lightly.

“Indeed, four years ago, at my first inauguration, I urged all Ghanaians to be, and I quote: “citizens and not spectators”. I appealed to you to be active participants in the effort to help build the Ghana we want — the democratic, free, prosperous and united Ghana envisioned by our founding fathers as the Black Star of Africa.

“The sheer can-do-spirit of the Ghanaian is the bedrock on which we can build the Ghana of our dreams,” he said.

President Akufo-Addo said the COVID-19 pandemic came with lessons — that the country must be self-reliant — stressing that the pandemic had emphasised the fact that Ghana could no longer continue to be living on edge in a day-to-day economy.

That, he said, was dangerous for the survival of the country, and asked that buffers of protection in all aspects of our lives be established.

“So when there was a shortage in the supply of personal protective equipment, at a time when it was being sold at extortionist prices on the world market, the enterprise of the Ghanaian shone through.

“We produced, right here in Ghana, our own sanitiser, face masks, medical scrubs, gowns, liquid soap, among others,” he stressed, adding: “We can, indeed, build a Ghana Beyond Aid if we make full use, as we must, of the enterprise and ingenuity of our people, especially our young people.”

In that same vein, he said, “I expect the locally produced Eku Juice, one of the results of the government’s One-district, One-factory flagship policy, to replace rapidly the imported fruit juices on the shelves of our supermarkets, not because anyone will so decree but because the quality of the locally produced one is as good, if not superior.”

Citing the locally distilled gin, akpeteshie, as an example, President Akufo-Addo indicated that the made-in-Ghana and beautifully packaged ‘apio’ could compete in the most sophisticated markets in the world.

The President gave an indication of his development agenda for his second term, stressing that the construction of hospitals, provision of potable water and the reconstruction of roads would engage his attention.

“I pledge before this august House and the good people of Ghana that all I do will be for the common good, and with the firm foundation laid in my first term of office, we shall take a significant step towards reducing the infrastructure deficit that has plagued us all throughout our nationhood,” he said, and gave an assurance that the remaining 15 per cent of local communities without electricity would be covered by the end of his second term.

President Akufo-Addo congratulated re-elected and new Members of Parliament and also expressed appreciation to the various Heads of State and representatives from countries and diplomatic institutions for attending the event.

That, he said, was an expression of solidarity and friendship, which spoke volumes of their attachment to the goals and aspirations of the Ghanaian people and state.