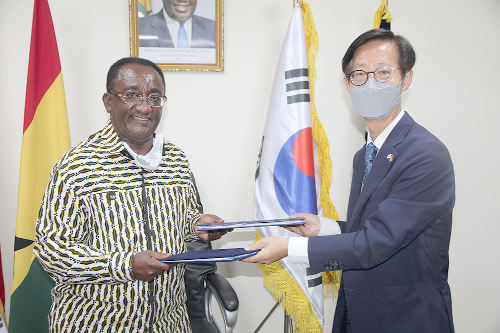 The Ministry of Food and Agriculture (MoFA) has signed a memorandum of understanding (MoU) with the Korea International Cooperation Agency (KOICA) for a $6.53 million grant for the rehabilitation and improvement of some irrigation systems in the country.

The “Rehabilitation of Irrigation Schemes and Improvement of Irrigation Water Management Project” are to be implemented in the Greater Accra and Volta regions from 2021 to 2024.

The project’s scope will cover the rehabilitation of irrigation facilities in the Aveyime Scheme in the Volta Region and the Ashaiman and Dawhenya schemes in the Greater Accra Region. It also includes capacity building of the Water Users Association (WUA) in all three schemes.

The Ghana Irrigation Development Authority (GIDA) will lead and implement the project on behalf of the ministry.

Dr Akoto said the signing of the MoU was a major step towards deepening the cooperation between the ministry and KOICA.

He said majority of small-scale irrigation schemes in the country were in a very bad state, with most of them currently not being used.

“If you take the Ashaiman Scheme, for instance, most of the land has been encroached upon, and the Aveyime and Dawenya schemes are also facing same problems. If you go inland to the forest areas, there are a couple of schemes that are not functioning while those that are functioning are not doing so at full capacity.

“This intervention is, therefore, very timely. We have two kinds of schemes, the small-scale irrigation projects and the large-scale projects — which have also fallen into the same situation that the small scale ones find themselves,” he pointed out.

He said with the help of the World Bank, the government was rehabilitating some of the large-scale schemes.

“We also have some small-scale irrigation projects dotted all over and if we have the capacity to rehabilitate all of them, they will greatly add to the country’s food production capacity, especially in the areas of rice, maize and other grains which are staples for Ghanaian food security.

“We will therefore appeal to KOICA not to stop at this intervention. All the projects to be rehabilitated are in the southern part of the country; there are a few significant ones around the country that I have in mind to get assistance to bring all of them into production and we hope they can help us with them,” he noted.

For his part, Mr Mooheon Kong said the project had an overarching goal to improve the incomes of beneficiary farmers in all the three irrigation schemes.

He said the project was designed to reflect and align with the relevant development frameworks, particularly SDGs One and Two, with targets on poverty eradication as well as ending hunger and achieving food security.

He said the project also aligned well with the priorities of the National Agricultural Investment Plan of the government; Investing in Food and Jobs programme and the Agenda for Transforming Ghana’s Agriculture (2018-2021) plan.

“The project will expand access to irrigated agriculture and ensure the sustainability and efficiency of the beneficiary irrigation schemes,” he stated.

topstories, Ministry of Food and Agriculture