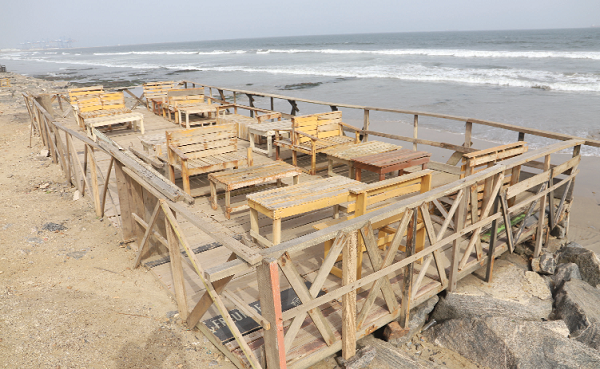 The Sakumono Beach near Tema was empty during the Easter festivities as a result of the President’s directive. Picture: SAMUEL TEI ADANO
30.5k Shares

For the second year running, the merrymaking associated with Easter Monday was absent yesterday, as COVID-19 safety protocols, which place a ban on many activities, including those at the beaches, were strictly enforced.

The security agencies, mainly the police and the military, deployed men and equipment in town, at the beaches, pubs and other restricted areas to enforce the restrictions

From Good Friday, military helicopters monitored the beaches from Aflao to Axim, with emphasis on those in Accra and Tema.

The Daily Graphic monitored activities at five of the most patronised beach facilities along Accra’s coastline and observed that all was quiet.

Policemen in uniform and officers of the Ghana Immigration Service mounted temporary posts at the entrances to those resorts, questioned guests and turned them away.

Yesterday, the Greater Accra Regional Minister, Mr Henry Quartey, who has been on a crusade against indiscipline in the region, joined the security forces in a helicopter flight to monitor compliance.

The exercise, which lasted about three hours, took the minister to some of the most visited beaches and resorts during such festivities.

The team moved from the Air Force Base to the coastal areas in Ada, through to the Kokrobite Beach around Kasoa.

From the air, it could be seen that the beaches were practically deserted, with only a few fisher folk going about with their activities.

Bubbling activities at popular beaches such as the Titanic Beach, the La Pleasure Beach Resort and the Kokrobite Beach were absent.

Speaking to the media after the tour, the regional minister commended the various security agencies for ensuring strict compliance with COVID-19 safety protocols at the beaches.

He said they had perfectly executed the job they were tasked to, and that had saved the country from the spread of the virus.

Going forward, he said, it would be appropriate if security men could be stationed at the beaches to ensure continuous adherence to the protocols.

The minister gave an assurance that the regional coordinating council (RCC) would ensure that metropolitan, municipal and district assemblies (MMDAs) were empowered at the local level to deploy task forces to the beaches to enforce the restrictions.

“The strength is not enough for us to maintain them at the beaches, but we will balance it. As times goes on, we will empower the MMDAs to see how they can use their local task force to enforce some of these restrictions, but before that, we will come in again during special occasions to ensure that people comply with the protocols” he said.

Some operators of hotels and eateries at the beaches lamented the negative impact the closure of beaches had on their businesses.

The General Manager of the Golden Beach Resort, Mr Eric Geraldo Kumah-Baku, told the Daily Graphic that the enforcement should have come with a strategy that prevented revellers from accessing the beach front, while allowing hotels and eateries to operate, in accordance with the COVID-19 protocols.

“We were expecting higher sales today, as it is Easter Monday, but due to the President’s order, we have not sold anything at all and our rooms, which are 70, are all empty because even if people are coming to book rooms and not necessarily going to the beach, they get stopped by the police,” he said.

Mr Kumah-Baku explained that already hotels and the entire hospitality industry were facing a downturn due to the outbreak of the COVID-19 pandemic.

He said the directive, although important to prevent the spread of the virus, was supposed to have a human face to ensure that operators of such facilities were not overburdened.

“We have a restaurant and a pool that is away from the beach, but when our customers are coming in, the police drive them away. So how will we pay electricity bills and our workers?” he asked.

The General Manager of the Osikan Beach Resort, Mr Tony Aklika, told the Daily Graphic that the directives and their accompanying enforcement were misplaced.

“This is not a beach; this is a restaurant close to the sea. I don’t know, but if my understanding of the directive is correct, then it means that we shouldn’t be part. But, as you can see, there is a huge police presence here and our customers have all been turned away,” he said.

He said the directive would cost the facility money, as its kitchen was stocked ahead of the festive period in anticipation of high sales.

“Our workers came today because yesterday we were open and nobody came to stop us. But today they are here and so we will respect the law,” he said.

The Manager of the Nordsee Beach Resort, Mr Sackey Brown, said the presence of security men at the entrance of the facility was intimidating.

He said the enforcement should have been restricted to the beach front and not inside the facility, including the restaurants.

Meanwhile, Emmanuel Baah reports that Abono in the Ashanti Region, where the famous Lake Bosomtwe is located, was mostly quiet during the Easter celebrations.

One could easily count the number of people at the lakeside, but nobody was allowed to swim in the lake.

When the Daily Graphic visited the lakeside yesterday, there were 12 massive police presence.

The police mounted a check point at the entrance to lakeside, and visitors who could not justify their visit to the community with genuine reasons were turned away.