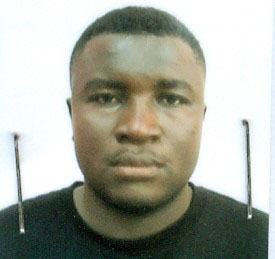 It has emerged that the main suspect who fired the shots that killed the two police officers at Gomoa Buduburam on Wednesday afternoon was first slapped by one of the officers.

The suspect, in turn, went to his car under the pretence of taking out money from the car according to the eyewitness, but brought out the gun and fired at the police officer.

In a radio interview with Accra based Joy FM on Thursday morning, the eyewitness said the police officer then took to his heels and headed towards the grocery shop in which the eyewitness and two other persons were.

The officer, who was then bleeding profusely reportedly urged the eyewitnesses to take cover and they did so by hiding behind a refrigerator inside the grocery shop.

The suspect, according to the eyewitness entered the shop and ordered them out after which he shot again at the police officer.

The acting Inspector General of Police (IGP), Mr James Oppong-Boanuh, has placed a GH¢10,000 bounty on the head of Eric Kojo Duah, who is alleged to be the main suspect involved in the killing of two policemen.

The police Wednesday afternoon arrested three other suspects — Ibrahim Zakaria, Isaac Amissah and Dominic Commey — for allegedly shooting and killing two policemen at Gomoa Budumburam, near Kasoa in the Central Region, leaving Duah on the run.

The suspects allegedly shot Sergeant Michael Gyamasi and Lance Corporal Awal Mohammed, both attached to the Motor Traffic and Transport Department (MTTD) of the Ghana Police Service at Kasoa, who were on task force duties on the Kasoa-Winneba highway.

The suspects, who were using an unregistered Toyota Camry vehicle and said to be driving recklessly, shot the unarmed policemen after refusing to stop when the security officers signalled them to do so.

Duah, whose pistol was found in the abandoned Toyota Camry, has been declared wanted.

The IGP has also dispatched a team from the Police Headquarters to support the Central Regional Police Command in its investigations.

How the policemen died

Police sources told the Daily Graphic that Sergeant Gyamasi died on the spot, while L/Corporal Mohammed was rushed to the Police Hospital in Accra in critical condition, where he was pronounced dead.

Sgt Gyamasi, the sources said, received multiple gunshots, including a shot to the head.

They said he rushed into a nearby grocery shop after being shot at, ostensibly to take cover, but collapsed on entering.

L/Corporal Mohammed, the sources said, received gunshots in the lower pelvic and left side of the back and died at the Police Hospital while he was being prepared for the theatre.

The deceased policemen had been detailed for task force duties on the Kasoa-Winneba highway yesterday, using a police branded pick-up vehicle.

About 12:23 p.m., the sources said, they intercepted an unregistered blue/black Toyota Camry saloon car, with some people on board.

The occupants, on seeing the policemen, who signalled them to stop, refused to stop and sped off.

Sgt Gyamasi, who was the service driver, with L/Cpl Mohammed aboard, chased the saloon car.

After a few metres, three occupants of the Camry reportedly came out of the vehicle, and when the policemen made an attempt to arrest them, the three shot the two policemen, killing Sgt Gyamasi instantly and severely injuring L/Cpl Mohammed.

The suspects bolted with the Toyota Camry and later abandoned it at Aplaku, while a police reinforcement went after them.

“It was a 100-manhunt operation, comprising personnel from the Criminal Investigations Department (CID) Headquarters, the Accra Regional Operations Unit, the Special Weapons and Tactics Team (SWAT), the Assault and Rover, Counter-Terrorism and the Kasoa Divisional Police Command,” the sources added.

With the assistance of the public, who offered information on where the suspects were headed, the police cordoned off the area where the Toyota Camry was abandoned and managed to arrest the three suspects at Aplaku.

According to police sources, a search on the vehicle revealed a registered document on a Ruger pistol, bearing the name Eric Kojo Duah.

Meanwhile, the CID Headquarters has since taken over the case and declared Duah wanted.