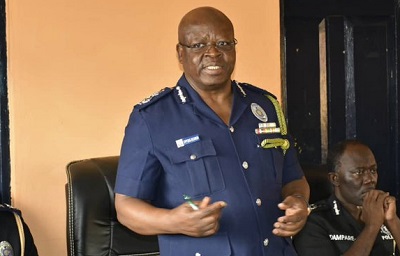 The Acting Inspector-General of Police (IGP)(), Mr James Oppong-Boanuh has directed specialised teams of investigators and operations from the National Headquarters to support the Regional Commands to investigate the killings of two police officers.

The two Police officers were killed at Manso Nkwanta in the Ashanti Region and Akyem Swedru in the Eastern Region, respectively between 6:00 pm of Monday 19th August 2019 and 6:00 am of Tuesday 20th August 2019.

According to a statement signed by the Director, Public Affairs of the Police, Supt. Sheilla Kessie Abayie-Buckman the two cases will be investigated speedily.

We'll unravel completely, what happened to our brother -IGP pic.twitter.com/OPBjMKemk4

On a visit to commiserate with the wife and family of L/Cpl. Alhassan Asare who died while on duty at Akyem Swedru, the IGP assured that the Police will unravel completely what happened to the cop.

He also explained the compensation system in place for officers who die in the line of duty and assured officers of unflinching support once they perform their duties professionally.