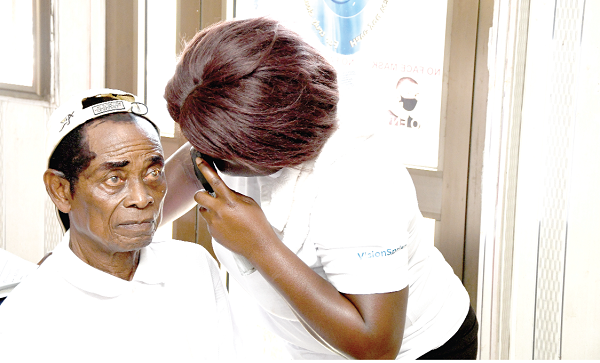 A man being examined by an eye specialist.
30.5k Shares

About 331,700 people suffer from severe visual impairment, representing 1.07 per cent of the country’s population.

The Head of the National Eyecare Unit, Institutional Care Division of the Ghana Health Service (GHS), Dr Hornametor Afake, said another 229,400 people, about 0.74 per cent of the population, weretotally blind in the country.

The prevalence of blindness is higher in rural areas, making up about 0.79 per cent of the rural population, compared to about 0.67 of the urban population.

Dr Afake added that 155,992 or 67.74 per cent of those blind lived in areas with little or no access to quality eyecare services.

The head of the eyecare unit disclosed these at a press briefing in Accra last Thursday as part of activities commemorating World Sight Day 2022 on the theme: “Love your eyes”.

Dr Afake mentioned interventions by his outfit to include promotion, prevention, treatment and rehabilitation, as well as correction of refractive error with spectacles or surgery, and cataract surgery.

He said the GHS, in collaboration with partners in 2018, put in place a national cataract outreach programme (NCOP) to augment efforts at improving cataract surgeries, especially to the underserved.

Dr Afake said the programme was supported by the Himalayan Cataract Project, which provided consumables, equipment and other related items to perform over 46,000 cataract surgeries on outreach bases.

As of the first half of 2022, he added that the eye care unit also coordinated surgical outreaches under the programme, covering over 7,000 surgeries.

Globally, Dr Afake said at least 2.2 billion people had a near or distance vision impairment, while unaddressed poor vision also resulted in lost productivity of $411 billion.

Representatives of civil society organisations, the Opthalmological Society of Ghana, the Ghana Optometric Association and the Ghana Opticians Association, all pledged their readiness to help people with sight challenges.

The acting Director, Institutional Care Division of the GHS, Dr Lawrence Ofori-Boadu, advised the people to take better care of their eyes.