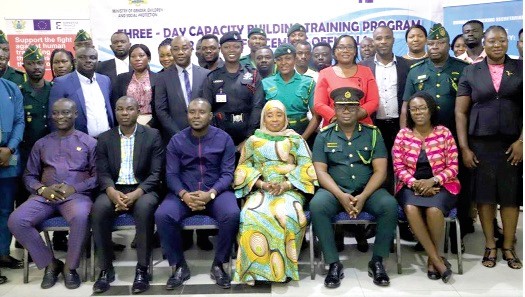 Lariba Zuweira Abudu (seated 3rd from right), Minister designate for Gender, Children and Social Protection, and some dignitaries with the beneficiaries after the session. Picture: EMMANUEL BAAH
30.5k Shares

The Ministry of Gender, Children and Social Protection (MoGCSP) says a lot has been achieved in relation to the rescue and prosecution of offenders of human-trafficking and irregular migration.

The Minister-designate of MoGCSP, Lariba Zuweira Abudu, announced this during the opening of a three-day capacity building programme for law enforcement agencies on counter-trafficking and irregular migration held in Kumasi last Wednesday.

Human trafficking is the recruitment, transportation, transfer, harbouring, trading or receipt of persons within and across national borders by the use of threats, force or other forms of coercion, abduction and fraud among others.

The three-day workshop was held in collaboration with Expertise France, with financial support from the European Union (EU) on the theme: “Combating human trafficking and irregular migration in Ghana”, and aimed at equipping officers to effectively implement the Human Traffic Act 2005 (Act 694).

The beneficiaries, drawn from across the country, were trained in human rights issues, victim identification, rescue operation, victim protection, investigation, building dockets, among others, to bring them to speed on modern ways in handling human-trafficking issues.

They were selected from the Ghana Revenue Authority-Customs Division, the Ghana Police Service, the Ghana Immigration Service and the Economic and Organised Crime Office (EOCO).

Madam Abudu said the feats were made possible through regular education, law enforcement and awareness creation.

For his part, the Project Manager, Expertise France, Serge Akpalou, said throughout the year, monitoring visits were conducted across the country and its borders to understand the state of affairs on the menace and to effectively tackle the issue at hand.

He said so far, over 375 officers had been trained and 80 other officers had also benefited from an advanced level training programme.