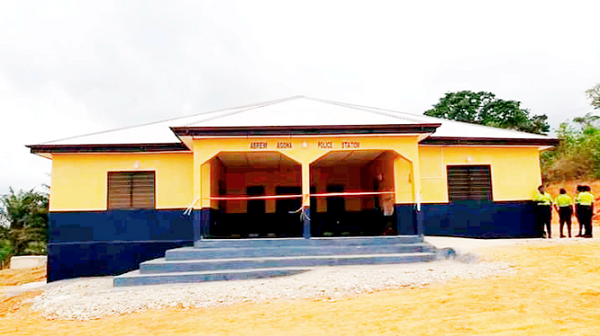 The Church of Pentecost has built a GH¢135,000 police station at Abrem Agona in the Komenda Edina Eguafo Abrem (KEEA) Municipality of the Central Region to replace an old dilapidated one.

The facility was inaugurated and handed over to the Ghana Police Service at a ceremony last Tuesday.

It has offices with washrooms, an armoury, exhibit store, orderly room, male cell with toilet and bathroom.

At the ceremony, Pastor Ofori said the construction of the facility was inspired by the national agenda of the church to provide decent facilities to support the security agencies.

The new facility replaced a dilapidated one which was a deathtrap for police personnel, as well as the clients who sought their services.

The cells were also in bad shape, compelling police officers to always refer suspects on remand to Elmina.

According to Pastor Ofori, the church was also working to complete a police quarters that had the capacity to accommodate 10 police officers, adding that consultative meetings had been held with the major stakeholders in the community on the project.

Nana Terkpor V commended the effort of the church to support the infrastructural development of the community, saying the newly built facility would help reduce the crime rate and other forms of violence in the community.

DCOP Twumasi-Sarpong thanked the Church of Pentecost for putting up the edifice for the community, saying the facility would motivate the police officers to work efficiently and effectively.

The Area Head of the church, Apostle Samuel Yaw Antwi, added that the gesture was part of the church's humanitarian service to the community.

Apostle Antwi gave an assurance that the Church of Pentecost would continue to partner the government in the delivery of its mandate to the country.

The Municipal Chief Executive for KEEA, Mr Appiah Korang, applauded the leadership of the church for its vision and show of generosity.