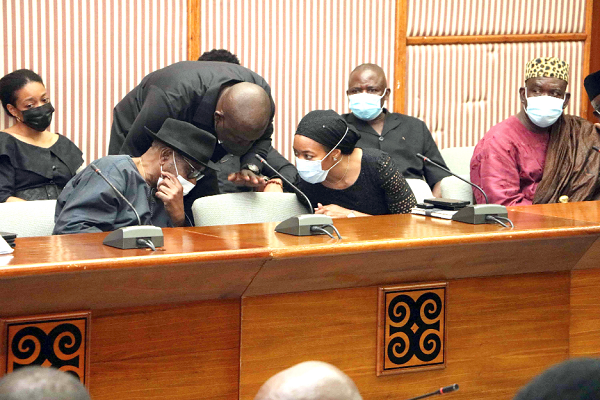 Series of activities have been lined up to celebrate and commemorate former President Jerry John Rawlings ahead of his interment on Wednesday, January 27, this year.

The activities, which will start from Friday, January 22, in the Anlo State, are made up of celebratory and traditional events.

Addressing the press in the Accra last Wednesday in the company of family representatives,he said the remains of former President Rawlings would be entombed at the Military Cemetery at the Burma Camp in Accra.

He said the choice for the military cemetery was because it was now the designated place for the interment of former Heads of State of the country.

The national event, he said, would start with a Catholic Requiem Mass at the Holy Spirit Cathedral in Accra, followed by a vigil at the Air Force Base at 6p.m.

On Monday, January 25, he said, the remains of the late President Rawlings would be laid in state at the Accra International Conference Centre (AICC).

According to Mr Oppong Nkrumah, the filing past of the remains of Mr Rawlings would then kick off, starting from the heads of security agencies, leaders of political parties and the general public.

On Tuesday, January 26, he said the filing past would resume at 9 a.m. led by President Nana Addo Dankwa Akufo-Addo, Vice-President Mahamudu Bawumia, former heads of state, as well as heads of constitutional bodies.

At 10 a.m., he said parliamentarians, led by the Speaker, Mr Alban Bagbin and former Speakers would also file past.

Members of the Diplomatic Corps will file past at 2 p.m.

The traditional and customary rites and celebrations, he said, would be held at the foyer of the Accra International Conference Centre (AICC), while the body was still in state.

On Wednesday, January 27, the caretaker minister said, the burial service for former President Rawlings would be held at the Black Star Square in Accra with full military honours and ,therefore, would be led by the Ghana Armed Forces.

The body would later be buried at the Military Cemetery at Burma Camp in the La Dadekotopon Municipality in the Greater Accra Region.

Former President Rawlings died at the age of 73 at the Korle Bu Teaching Hospital (KBTH) in Accra on Thursday,November 12, 2020.

committees should reflect the nature and character of the 8th Parliament.

Mr iddrisu also noted that there was nothing like ‘Majority and Minority’ in the current parliament, as both parties boast 137 seats each.

“Article 97, Clause (1)(h) of the 1992 Constitution provides: ‘A member of parliament shall vacate his seat in Parliament if he was elected a Member of Parliament as an independent candidate and joins a political party.’ So the question is, by that declaration, has the Member for Fomena joined the NPP?” Mr Iddrisu asked.

The Leader of the NPP caucus, Mr Kyei-Mensah-Bonsu, at a counter presser to respond to the NDC caucus, said the Speaker would, barring any last- minute change of mind by Mr Andrews Asiamah Amoako, tomorrow declare the NPP caucus the majority in the House.

He said Mr Amoako had officially written to the leadership of the House indicating that he intended to align and do business with the NPP caucus.

For Mr Kyei-Mensah-Bonsu, that would mean that the NPP would control the House with that additional one independent seat.

He said the matter of which side constituted a Majority should not be the subject of litigation any longer, now that the independent MP had officially written to the House about his intentions.

“He has made a declaration and I am only hoping that between today and tomorrow, he doesn’t change his mind and make a U-turn. If he doesn’t and stands by his own declaration and the Speaker makes that open affirmation and declaration in plenary, then the decision would have been made and it will determine where the pendulum will swing.

“As far as I am concerned, that should settle the matter, and if it does and settles where the majority will sit, to me that will be the end of the matter.

“The NDC is saying that it will insist that the declaration of the independent MP that he will do business with the NPP caucus does not make the NPP the majority. By what stretch of imagination is the NDC saying this?” Mr Kyei-Mensah-Bonsu asked.

Majority not dependent on a party

The Leader of the NPP caucus also noted that assuming a Majority caucus was not dependent on just one party.

“In the recent election, assuming the NPP had garnered 120 seats and NDC 130 seats; the NDC would control majority of seats in parliament but the two together would make just 250 seats. But to the extent that neither did cross the magical number of 137, it could not be described as the majority caucus.

“The 25 remaining that would have been made up of independent MPs and members of other minority parties, if they elected to do business with the NDC, would have formed the Majority caucus,” he explained.

Mr Kyei-Mensah-Bonsu said the decision of Mr Amoako to do business with the NPP, therefore, made the NPP caucus the Majority caucus.

The Suame Legislator was hopeful that the House would soon overcome the obstacle of which party constituted the Majority caucus.

“That is the initial step of consultations and consensus building, but the fact that adding one to the 137 of the NPP will put them in the Majority and thereby qualify it to be called the Majority party comes without any equivocation,” Mr Kyei-Mensah-Bonsu said.