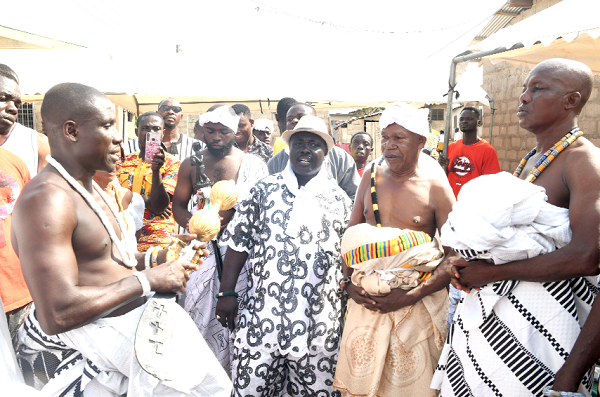 The Sempe Amafrom community in the Ga North Municipality in the Greater Accra Region has installed a new chief. The chief, whose stool name is Nii Apan Osaadu I, is known in private life as Mr Osaadu Appan.

The installation of the new chiefs follows a decision taken by the five gates of the Amafrom royal  family to enstool chiefs to take charge of the affairs of the community rather than the wulomei who, hitherto, had ruled the community.

The five gates that took the decision are Nii Osaadu Kojo We, Kwaku Gyanor We, Dade Osaadu We, Larbie Kojo We and Osaadu Kobla We

In spite of it being a solemn event, hundreds of people in the community and traditional leaders from other traditional areas were present to lend their support.

Among the notable personalities that were in attendance was the spiritual leader of Ga Odumase, Wulomo Numo Osaadu Kojo III,

Nii Osaadu I, subsequently took the oaths of secrecy and allegiance to the people Sempe Amafrom.

The Dzasetse of Amafrom, Nii Apan Larbi introduced the new rulers to dignitaries present, the assemblyman of the area, zongo chiefs and the people.

He pledged his commitment to lead the community and urged them to have confidence in his ability to lead them to their expected goals.

He promised to build a palace to serve as the administrative seat for the Amafrom Traditional Council.

“It is, therefore, necessary and binding on us all to come together in unity to bring the needed development to our dear community,” he said.

Nii Osaadu expressed his gratitude to the chiefs present including those newly inaugurated, churches in the community and opinion leaders for their support and love extended to him during the processes leading to his installation.

He said the people of Odumase, Dome Sampa, Pampaaso, Achiase and Amafrom were from one family stock and shared everything in common.