Boards for development authorities sworn in 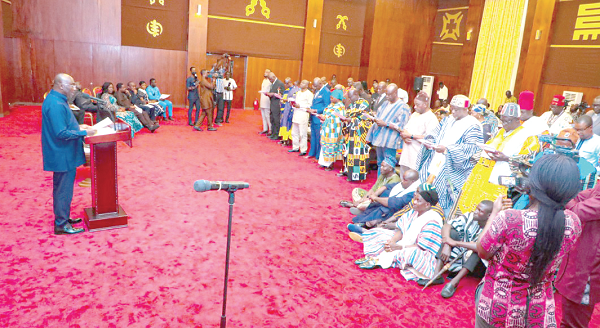 A number of these projects have been completed and are being utilised by beneficiary communities, while the remaining projects are at various stages of completion.

The Vice-President, Dr Mahamudu Bawumia, who disclosed this, said it was important that the projects were inaugurated and brought to public knowledge when he swore in the governing boards of the three development authorities.

Dr Bawumia encouraged the development authorities to label the projects they had initiated so that the public would know the source of the projects.

“What is clear is that the development authorities have actually completed a large number of projects across the country but sometimes we do not quite acknowledge and appreciate what has been done.


Dr Bawumia stressed the commitment of the government to deliver those projects to fully achieve their objectives, and said it was the reason for the careful selection of another set of distinguished men and women as board members to help realise that objective.

He urged the new governing boards to support the management of the respective development authorities to leverage government resources and to also identify innovative approaches and interventions which would secure resources from international development partners, private sector investors and other stakeholders to accelerate the completion of projects across the country.

Dr Bawumia said investing in infrastructure at all levels was one of the surest approaches to developing a nation.

He said it was for that reason that in 2017, the government established the three development authorities to, among others, address the persistent and unequal socio-economic infrastructure restricting the level of transformation envisaged across all parts of the country.

“The development authorities have since become reliable development vehicles in their respective zones and constituencies across the country through the implementation of varying economic and social development interventions such as the infrastructure for poverty eradication programme which provides the framework for equitable disbursement of special funds of the cedi equivalent of a million dollars to each of the 275 constituencies to be invested in priority development projects of constituencies and other government priority initiatives,” he emphasised.

He further urged the authorities to forge strong relationships with the relevant ministries, departments and agencies (MDAs) and the metropolitan, municipal and district assemblies (MMDAs) to deliver sustainable development initiatives.

“There seems to be some weak coordination of ongoing and emerging development interventions and initiatives. I therefore urge the development authorities to continuously engage MDAs, MMDAs and all relevant stakeholders to synchronise their plans towards achieving the agenda of improving livelihoods of the people,” he advised.

Dr Bawumia also encouraged the development authorities to consider embarking on joint project monitoring and evaluation, as well as adopting memoranda of understanding for the management of completed projects to avoid duplications in the use of resources, and to further assist in the efficient allocation of resources.

The National Coordinator of the Secretariat for the three development authorities, Napaga Tia Sulemana, urged members of the boards to be open-minded in the performance of their duties.

She also called for effective collaboration between the boards and managements to ensure harmony at all times.

The Chairperson of the Middle Belt Development Authority, Alex Kwaku Korankye, on behalf of the boards, expressed appreciation to the government for the confidence reposed in them, and gave the assurance that the boards would discharge their roles with integrity and efficiency.