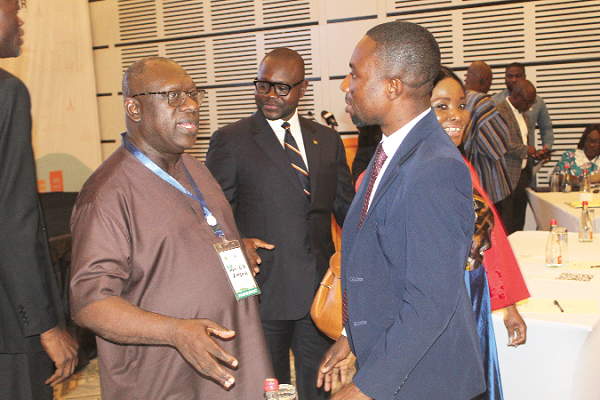 The government has secured $145 million credit financing from the World Bank to fund the delivery of urban infrastructure in 35 metropolitan, municipal and district assemblies (MMDAs).

The project, which comes under the Ghana Secondary Cities Support Projects (GSCSPs), includes markets, storm drains, roads, pedestrian walkways and streetlights and the credit facility will be disbursed to the assemblies this year, according to their population sizes.

The Minister of Local Government, Decentralisation and Rural Development, Dan Botwe, made this known when he opened the 2022 Ghana Urban Forum in Accra yesterday.

Launched in 2009 with support from CHF International, the Ghana Urban Forum aims to become a permanent forum for all stakeholders in the urban sector to establish a national consensus on dealing with the challenges and opportunities of rapid urbanisation.

This year’s event, a two-day forum, has attracted over 200 experts on urbanisation to discuss relevant urban development issues to promote good governance and development.

It is being held on the theme: "Rapid urban growth in Ghana: Promoting effective urban planning for liveable and sustainable cities and towns".

Mr Botwe said since its inception in 2018, the GSCSPs had delivered 117 infrastructural projects, providing facilities such as markets, storm drains, bus terminals, roads, pedestrian walkways and streetlights in the assemblies.

He explained that until recently, the $100 million GSCSPs aimed at providing transformational urban infrastructure was meant for 25 municipal assemblies in the country.

Under that initiative, GH¢1,881,553,238 was transferred to the 25 initial assemblies between 2018-2021 to implement several urban flagship sub-projects to promote local economic development.

“The implementation of 66 additional infrastructural projects in the 25 municipal assemblies for Urban Development grants One and Two is at various stages of completion,” he indicated.

He said the SOCO project was expected to reduce the exposure of border communities to extremism and violence through the delivery of socio-economic and climate resilient infrastructure.

He said women and young people would also be trained in income-generating activities to improve their livelihoods.

Just like the SOCO project, he said, another project, the Ghana Productive Safety Net Project, a World Bank credit facility secured by the government, was being implemented in 100 MMDAs.

He said 15,000 beneficiaries would be provided with entrepreneurial skills and grants to establish their own business ventures.

“It is also expected that 50,000 beneficiaries will be provided with short-term employment under the labour-intensive public works (LIPW) component of the project.

“It is envisaged that the successful execution of these projects, coupled with other government interventions in these communities, will result in improved living conditions of Ghanaians and reduce rural-urban migration,” he noted.

The Local Government Minister further said the ministry was implementing the Ghana Urban Mobility and Accessibility Project (GUMAP), which seeks to strengthen the capacities of the institutions holding key responsibilities in public transport and traffic planning and management in the Greater Accra Metropolitan Area.

The government, he said, had taken cognisance of the need to promote urban planning and management and had, therefore, taken steps to re-align the Land Use and Spatial Planning Authority (LUSPA) as an agency of the Ministry of Local Government, Decentralisation and Rural Development.

He explained that the move was aimed at emphasising and strengthening the role of MMDAs in urban development control to ensure that for each development plan, there was a corresponding spatial plan which was monitored and enforced to promote sustainable development within our cities and towns.

The Minister of Works and Housing, Francis Asenso-Boakye, said the forum presented an opportunity to take stock of how the country’s cities were being planned and developed and proffer sustainable solutions to meet the targets of the Sustainable Development Goals, with barely eight years away to 2030.

He said that provided a high-level discussion on the potential of national urban policies to address challenges in the fields of the environment, housing, mobility, spatial planning and innovation and technology.

A former Vice-Chancellor of the Kwame Nkrumah University of Science and Technology (KNUST), Professor Kwasi Kwafo Adarkwa, urged experts and stakeholders to provide some guidance regarding the way the country could plan and manage its affairs to transform the cities for sustainable socio-economic development.

He said it was crucial to promote effective urban planning for liveable and sustainable cities and towns by laying out standards and principles for planning the possible construction, development and improvement of human settlements.

He also called on stakeholders to deepen their commitment to find lasting solutions to the country's urban challenges.

The Greater Accra Regional Minister, Henry Quartey, reiterated the need for an increase in urban infrastructure due to rapid urbanisation.

He expressed the belief that the outcome of the forum would stimulate the commitment of the government and stakeholders to ensure efficient urban planning and development.

In an address read on his behalf, the Country Director, CMU, World Bank, Pierre Frank Laporte, also expressed the World Bank’s commitment to continue to provide financing and technical support to improve the urban sector.

The UN Resident Coordinator- Ghana, Charles Abani, lauded the World Bank and the UN Habitat for their support technical expertise to drive the sustainable development agenda.