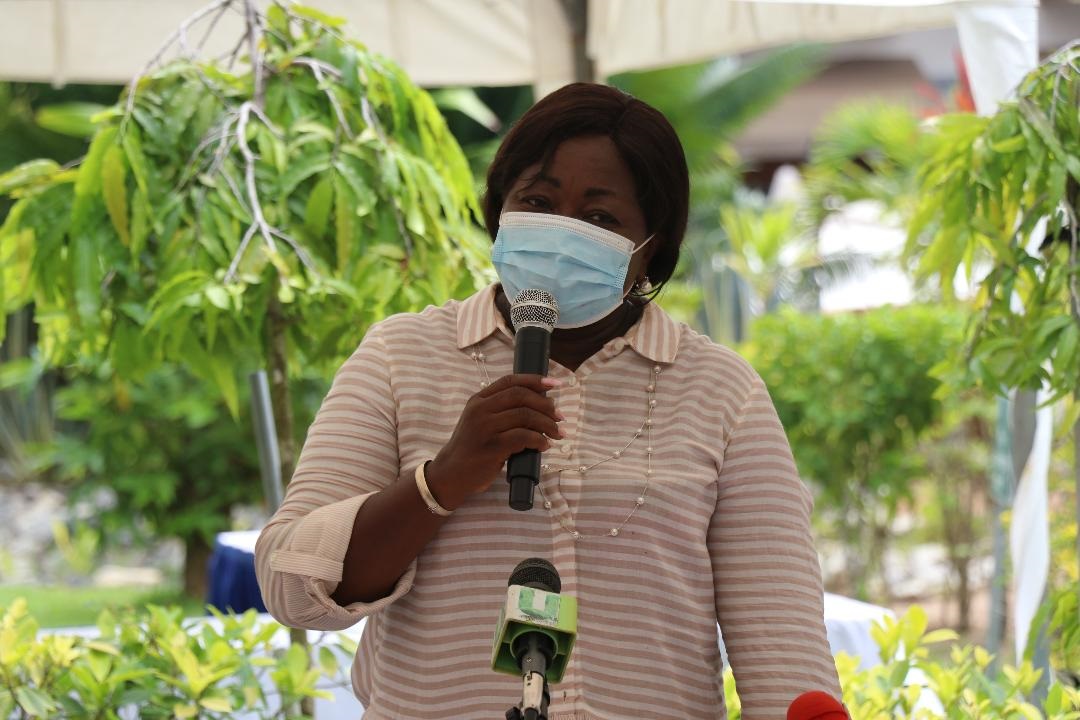 Mrs Patricia Appiagyei, MP for Asokwa addressing the adolescents at the conference.

A group of adolescents in the Central Region have called on the government to ban pornography as a means to curb teenage pregnancy in the country.

According to them the country’s youth were over-exposed to pornography which influences them to engage in risky behaviours, often leading to teenage pregnancy.

The youth were participating in an intergenerational conference during which 150 adolescents from all the districts in the Central held discussions with Members of Parliament (MPs) on the high incidence of adolescent pregnancy in the country.

The adolescents contended that the enactment of laws that would restrict access to pornography would limit adolescents’ exposure and their attention would be diverted to more productive ventures.

According to them, other triggers of teenage pregnancy were broken homes, social media influence, love for material things, dealing with the challenges of menstruation and irresponsible parenting.

The youth further appealed for a policy to make access to sanitary pads affordable and accessible to adolescent girls, particularly to the rural poor to prevent the situation where girls depend on financial support from men and boys to procure sanitary pad when they menstruate every month.

In a statement to open the conference, Mrs. Patricia Appiagyei, MP for Asokwa said the discussions at the conference will reveal the real issues behind the statistics to enable the legislators define their role in finding a solution to teenage pregnancy in the country.

She noted that although there are indications that teenage pregnancy was on the decline in the Central Region, due to a number of interventions being implemented, the rate of reduction was very slow, hence the need for legislation.

In a statement read on his behalf, Mr. Niyi Ojuolape, the UNFPA Representative said the UN agency was implementing a joint programme with support from Canada to empower adolescent girls through improved access to gender-responsive sexuality education and quality sexual and reproductive health services in Ghana.

“A core pillar of this programme is to engage policy makers at varied levels to advocate for, and facilitate a paradigm shift for promoting investments in adolescent girls,” he added.

Touching on the issue of adolescent pregnancy, Mr. Ojuolape said “the statistics released by Ghana Health Service, even if it is declining over the years is still worrying. To have over 2,800 girls between 10 to 14 years getting pregnant in 2020 when we have a law that says having sex with a girl under sixteen years of age is defilement is worrying because it is clearly a case of sexual and gender based violence.”

“We are worried because we know that all the adolescent pregnancies are unintended pregnancies. Majority might result in unsafe child births and the dreams of these young people will not be fulfilled,” Mr Ojuolape stated.

He reiterated that the mission of UNFPA was to deliver a world where every pregnancy is wanted, every childbirth is safe and every young person's potential is fulfilled.

Mr. Ojuolape indicated that if Ghana wants to really turn the wheels towards economic prosperity, then it must collaborate and contribute to the harnessing of demographic dividend through investment in young people; one of which is to find a real solution to curbing teenage pregnancy.

He said UNFPA recognises the Members of Parliament as ‘agents of change’, with social and moral capital to advance the International Conference on Population and Development (ICPD) agenda in Ghana, including issues affecting adolescent girls hence the conference to find a solution to teenage pregnancy.