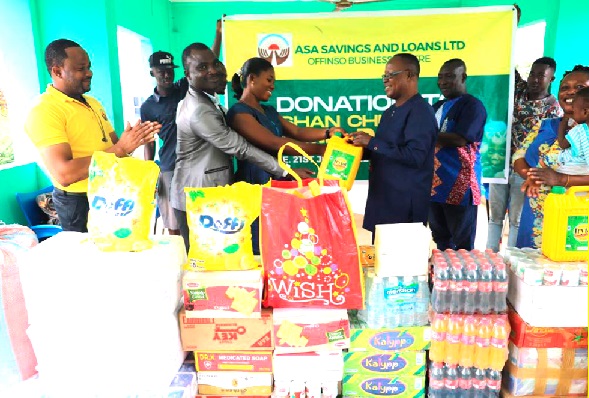 ASA Savings and Loans Limited has donated some food items and toiletries to support the inmates of the Ashan Children’s Home at Denase in the Afigya Kwabre South District in the Ashanti Region.

The gesture, Divisional Manager, Ashanti North, Asa Savings and Loans, Felix Ahiadome said, was part of a corporate social responsibility to the people the company served.

After a short ceremony to hand over the items at Denase last Tuesday, Mr Ahiadome expressed gratitude to the caregivers and caretakers of the children at the foster home for their dedicated service in creating a better place for over 50 children currently in their custody.

He urged the caretakers to use the items judiciously to cater for the children to encourage others to also help with other needs.

He emphasised that the primary motivation of Asa Savings was not to make only profit, but more importantly to ensure that the company’s customers and the community in which it operated benefited from its operations.

The Founder of the home, Nana Boafour Konadu Yiadom, expressed gratitude to the organisation for the donation, saying it would greatly help the home.

He said the home never expected such donation, and as such was full of praise for the organisation for coming to assist them.

Nana Konadu said even though some organisations had been coming to the aid of the home, the main challenge facing it was financial.

He said as a private institution that did not receive support from the government, he had been running the place from his own pocket.

“We need adequate funds to help with the upkeep of the children. People should not only donate food items because we need more to run the place,” he appealed.

The home, which was established some 20 years ago, currently has over 50 children, some of them currently in the university, some in senior high school and others in basic schools.