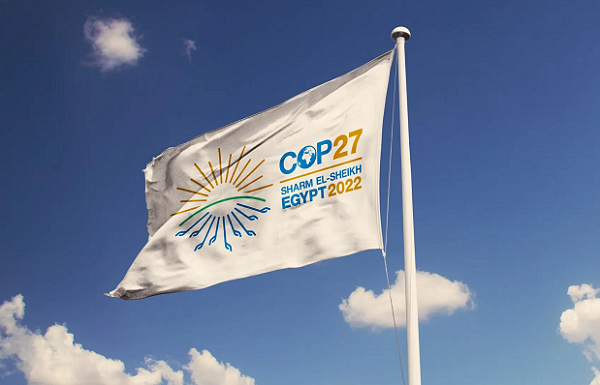 Over 100 Heads of State and Government have confirmed their participation in this year’s United Nations (UN) Climate Change Conference (COP27) in the Egyptian resort city of Sharm El Sheikh.

The political authorities, power blocs, climate experts, negotiators, as well as key stakeholders, will be at the global table with cards that experts in the climate space believe could be a make or break in the fight against the climate crisis.

A high-powered delegation from Ghana will be among over 45,000 delegates across the world that will converge on the Egyptian city, located on the southeastern coast of the Sinai Peninsula, for the conference.

The Minister of Lands and Natural Resources, Samuel Abu Jinapor, and the Minister of Environment, Science, Technology and Innovation, Dr Kwaku Afriyie, are leading the government delegation, which comprise chief executive officers (CEOs) of related state agencies, experts in the climate change space and policy makers.


Ahead of the global gathering on Monday, the COP27 President, Sameh Shoukry, has given the assurance that Egypt was ready to host “the Implementation of COP”.

In a statement issued last Wednesday, Mr Shoukry explained that the Sharm El-Sheikh International Convention Centre (SHICC) had been designated the blue zone for COP27, where all negotiations among delegates set to take place.

He added that a 22,500-square-metre green zone had been carved out as the place where the business community, the youth, CSOs, academia and artists from all over the world would pitch camp.

“The space is targeted at promoting inclusive dialogue and engagement among climate actors through events, exhibitions, workshops, cultural performances and talks,” he said.

Per the schedule, the Sharm El-Sheikh Climate Implementation Summit will take place on November 7 and 8, bringing together all participating Heads of State and Government.

Roundtable will also be held, focusing on six key topics — just transitions, food security, innovative finance for climate and development, investing in the future of energy, water security and climate change and the sustainability of vulnerable communities.

The discussions are meant to provide the opportunity for Heads of State to engage with heads of UN agencies, multilateral development banks, CEOs of private institutions and representatives of CSOs with the aim of developing practical, impactful and ambitious solutions to several of the climate challenges spanning mitigation, adaptation and finance.

Key thematic days have also been designated for panel pledging opportunities, discussions, rotundities and side events.

The thematic days are a part of efforts to advance climate action that can address existing implementation bottlenecks and gaps and deepen engagement with the youth, women, CSOs and indigenous people.

Three days will be dedicated to the youth and future generations, gender and civil society, their contributions, the challenges they face, the solutions they offer and how to mainstream their engagement into planning and implementation of climate policies.

Mr Shoukry, who doubles as Egypt’s Foreign Affairs Minister, observed that COP27 was a unique opportunity for the world to “come together, mend multilateralism, rebuild trust and unite at the highest political levels to address climate change”.

He expressed optimism that COP27 offered an opportunity for the world to take the bull by the horn in dealing with the climate crisis.

“We gather this year at a critical time of cascading risks and overlapping crises — multilateralism is facing a challenge due to geopolitical situations, spiraling food and energy prices and a growing public finance and public debt crisis in many countries already struggling to contend with the devastating impacts of the pandemic, all of which demand urgent attention,” he said.

Mr Shoukry observed that any delay in taking bold climate actions would be detrimental because “with every slightest increment of warming, the impacts will only get worse”.

He labelled COP27 as “the Implementation COP”, stressing the need for “full and faithful implementation of all the provisions of the Paris Agreement, along with pursuing even more ambitious nationally determined contributions (NDCs)”.

“We, as an international community, have agreed and recognised that the magnitude of climate challenge requires an inclusive partnership and collaboration among all stakeholders to deliver the action we need now in a people-centred and an all-of-society approach that ensures that no one is left behind,” he added.

The COP27 President urged all stakeholders to engage in a “flexible and constructive spirit” that contextualised the work being undertaken in the negotiating rooms, against the backdrop of the climate crisis and its urgency.