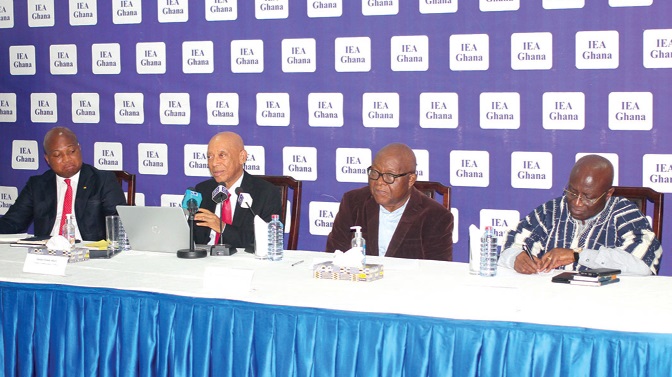 A former Commissioner of the Commission on Human Rights and Administrative Justice (CHRAJ), Justice Emile Francis Short, has advocated the curtailment of the excessive appointment powers of Presidents under the 1992 Constitution to enhance good governance and democratic accountability.

He argued that the excessive and unrestrained appointment powers and influence granted to Presidents under the Constitution created a winner-takes-all environment in the democratic dispensation.

The former commissioner was speaking at a seminar on the theme: “Reviewing Ghana's 1992 Constitution: The excessive powers of the President", in Accra last Tuesday.

It was organised by the Prof. Mike Oquaye Centre for Constitutional Studies at the Institute of Economic Affairs (IEA).

The seminar was attended by a cross-section of the public, including academics, lawyers, parliamentarians and students.


Justice Short also identified weak oversight by the Legislature as a major contributor to the large size of government that burdened the taxpayer.

To address the winner-takes-all politics, he suggested the implementation of the recommendations made by an 11-member advisory committee of experts and eminent Ghanaians constituted by the IEA to re-examine the issue and seek broader consultations for reforms.

Formed in 2014, the committee, which was chaired by the Catholic Archbishop of Cape Coast, the Most Rev. Gabriel Charles Palmer-Buckle, recommended, among other things, that appointments to key positions in the public sector should emanate from clearly designated bodies that had the capacity to identify suitable persons, using clearly pre-determined criteria.

Furthermore, the committee proposed that for some of the appointments, a duly constituted body comprising professional bodies or institutions shall recommend suitable individuals of at least five, from among whom the President shall make a nomination to Parliament.

Justice Short said a second look needed to be taken at the provision that the President’s consent must be sought in the appointment of board members of state-owned media.

Furthermore, he said, the President’s role in determining end-of-service benefits for most of his appointees, including Article 71 holders, as well as members of parliament (MPs), must be reviewed.

“It has been estimated that the President has the power to appoint not less than 5, 000 people into the public service,” he added.

Objecting to the provisions, the former CHRAJ Boss stated: “These practices are a recipe for patronage and cronyism and severely constrain the development of effective checks and balances and governmental accountability.”

Justice Short cited the various institutions whose chairpersons, deputies and other members the President retained the power to appoint and suggested that independent bodies should take up those responsibilities.

The institutions are CHRAJ, the Electoral Commission, the National Commission for Civic Education and the District Assemblies Common Fund.

Other appointments by the President are the heads of the security agencies, including the Inspector General of Police, the Auditor General, the Head of the Audit Service, the Governor of the Bank of Ghana and the Chairperson and members of the National Development Planning Commission.

The Majority Leader in Parliament, Osei Kyei-Mensah-Bonsu, and the Member of Parliament for North Tongu, Samuel Okudzeto Ablakwa, both agreed with Justice Short’s submissions, describing them as “thought-provoking”.

Mr Kyei-Mensah-Bonsu, however, observed that MPs who were at the same time ministers appointed by the President had the requisite expertise for the job and stressed the need for vigilance on the part of the Appointments Committee of Parliament to ensure that the right people were appointed to positions of trust.

“All manner of people are appointed because of ineptitude on the part of Parliament. I have a preference for the Westminster type of system and not the presidential type," he said.

Mr Ablakwa was happy about the suggestion made by Justice Short that some of the appointing powers of the President be given to independent bodies.

He, however, cautioned that the country must tread cautiously in the composition of such bodies, so that they become neutral, adding that “credible political parties with representation in Parliament should also be consulted when constituting such bodies”.

Prof. Oquaye, who is a former Speaker of Parliament, chaired the event.

He said the intellectual speeches of all speakers, including former Presidents, would be compiled into a report and appropriate recommendations made for implementation.