Ekow Alabi Savage: They Call him the Rhythm Driver 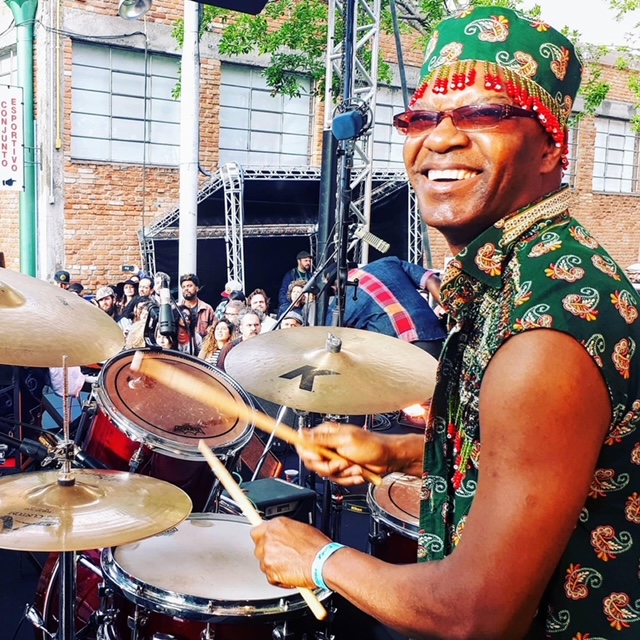 After some hectic recording sessions at the Joy Sound Studio in Kumasi recently, drummer Ekow Alabi Savage took his long-term music collaborator, Finnish multi-instrumentalist Jimi Tenor, out for shopping at Kejetia Market and then for a lunch of fufu and ebunuebunu soup at a ‘chop bar.’

Savage, who is also a producer, songwriter and singer, has been based in Berlin, Germany since 1978. He, however, comes home regularly and is in town now for the second edition of the Our Music Festival which he initiated last year with drummer Aryee Brown.

His Finnish friend, whom he joined musical forces with 20 years ago, is also in Ghana to work on a new project. Savage felt stepping out with him to feel the ambience of Kumasi was a way of dipping him into some of the typical Ghanaian sounds and sights that helped nurture his ability as a fine all-round drummer.

Savage is a player who can be depended on to deliver at all times, no matter the type of music on hand. His irresistibly propulsive but delicate approach shows off his vast understanding of what rhythm is about. No wonder some of his colleagues in the music business call him The Rhythm Driver.

He knows versatility is the way to progress in the world of contemporary popular music. That’s why he takes on jobs that embrace virtually all styles of music. He is a well-travelled musician who has played gigs across Europe, Asia, Africa and the Caribbean.

He says his experience playing music across the world has made him appreciate the valuable rhythms that abound in Ghana. That observation inspired him and Aryee Brown to come up with the Our Music Festival.

The maiden edition of the festival came off on December 9, 2021 at the Alliance Francaise in Accra.

This year, the festival will be a two- show affair: December 12 at the GoetheInstitut, Accra and December 17 at the Chop n Chill Restaurant & Lounge at Kasoa, Obom Road near the Shell Filling Station.

Savage’s contention is that the phrase ‘Ghanaian music’ embraces a wide variety of traditional and popular styles and the festival’s key aim is to celebrate all those strands and help push them to new heights.

The man understands what it means to help drive music into unchartered territories.

In Berlin, he collaborated with guitarist/flutist, Mawuli Nukpese, to form the forward-looking Roots Anabo Afro-Reggae band. They came out with the ground- breaking Civilisation album and were the first African band to play at the prestigious Reggae Sunsplash music festival in Kingston, Jamaica, in 1984.

Always a personality with an adventurous streak of character, Savage says he would not have been in Germany had it not been his determination to see more of the world and improve himself as a musician.

Starting off as a percussion player in his mid-teens with the Cocoa Marketing Board-owned Sweet Beans band in Accra, he was keen to be part of a Sweet Beans trip to Europe but was left behind by Pat Thomas and the others in the band because he had no passport.

He decided to go to Europe on his own by any means possible. He managed to acquire a passport and a ‘connection’ helped him secure a visa to the then Czechoslovakia. He travelled on to East Berlin before undertaking a dangerous crossing at the famous Checkpoint Charlie in March 1978 to West Berlin. The two Berlins became one entity in 1990.

Anyone familiar with Savage knows he is a lively personality and the traitoften extends to his work on drums.

Depending on what the groove is, he can be intense, but calm; radiant but restrained. On a good day, he could surround himself with assorted percussion such as congas, bells, timbales, tambourines, triangles, maracas and cymbals to ‘sweeten’ any kind of music.

Though a believer in the conventional role of the drummer as the one who lays the foundation and supplies the groove for the rest of the band to exhibit their creative urges, Savage also knows the drummer need not be relegated to just a time-keeping and accompaniment roles. He loves to be free to contribute to the overall performance of a band as an equal partner.

Return To Zion and Going For Gold under his name. He’s also recorded four singles and working towards releasing an EP in early 2023.

The long-term picture for Savage and Aryee Brown is to eventually make Our Music Festival a well-established annual event in Accra and Berlin. They strongly believe music from Ghana has
the potential to make a bigger impact on the world with well-produced content and effective marketing strategies.

“Moving on, we would also like to bring on performers from other parts of Africa and the African Diaspora to enable us to share useful ideas on promoting Ghanaian and African music,” Savage said with confidence.

Meanwhile, he and Jimi Tenor are set to play a concert at the Marvels MiniGolf & Restaurant at Dzorwulu in Accra on Sunday, December 4. They call it An Evening of Afrogroove, Highjazz, Electro, Soul and More.