Tree planting must not be wasted effort 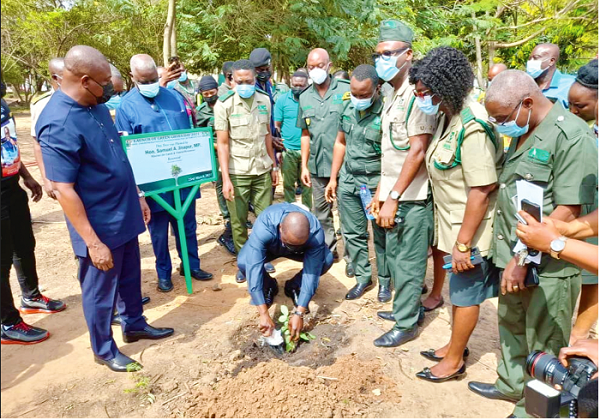 Flashback: Mr Jinapor planting a tree on the premises of the head office of the Forestry Commission. Those with him are Mr John Allotey (left), the Chief Executive of the FC, the directors of the various divisions of the commission, as well as Mrs Joyce Ofori-Kwafo (2nd right), the Public Affairs Director Follow @Graphicgh

Ghana has become the darling of the global community since it embarked on an ambitious project to plant five million trees on a single day across the country.

And it is for good reason, as we did not only pull it off but exceeded the target, planting about 7.6 million trees instead on June 11, 2021.

Indeed, President Nana Addo Dankwa Akufo-Addo, at the recent Climate Change Conference, COP26 in Glasgow, Scotland, flaunted the feat before the gathering, informing them that Ghana was readying itself to plant 20 million trees next year as a sequel to this year’s exercise.

Nonetheless, planting the trees is different from ensuring they survive, and it is why we find it refreshing the statement by the Ministry of Lands and Natural Resources (MLNR) that its initial assessment of the performance of the trees in the forest zones had shown that about 99 per cent were doing well.

The Daily Graphic also lauds the initiative by the ministry, dubbed ‘Visit your tree’, that will see all the high-profile personalities who took part in and planted trees on the Green Ghana Day, including the President and Vice-President Dr. Mahamudu Bawumia, visit their trees to ascertain how they are faring.

Also, all metropolitan, municipal and district assemblies, school authorities and individuals who planted trees will visit the trees they planted to ascertain their progress and share pictures of the trees for the public to know how they are doing.

The initiative will take off on December 11, this year, which will be exactly six months since the trees were planted, and we doff our hats to the ministry for coming up with this plan to ensure that most of the trees planted survive.

Sustaining the interest of the public in the tree-planting exercise as part of the Greening Ghana initiative is very necessary, else all the funds, time, other resources and trees planted will be a wasted effort, which will leave us the poorer.

This is why we support the ‘Visit your tree’ initiative that will be a precursor to the launch of the 2022 Green Ghana Day scheduled for the same day, December 11.

To even make the stock-taking event more successful, we suggest naming of the trees planted after those who planted them and a proper inventory of those trees taken in communities, districts and regions, which will include their locations.

That way it will be easy to place a finger on the number of trees actually doing well and in what area.

A competition can also be conducted to award the best communities, districts and regions in terms of the percentage of trees that have flourished.

We believe this will compel those who planted them to nurture them to maturity and become an incentive for next year’s exercise.

The Daily Graphic finds reassuring, the statement by Deputy Minister of Lands and Natural Resources in charge of Forestry, Mr. Benito Owusu-Bio, that the President had asked the Minister of Finance to allocate funds to support the planting of the 20 million trees.

For the June exercise the MLNR had to solicit funds from corporate organisations, so the government’s announcement that it had dedicated resources for next year’s tree planting in the budget presented to Parliament few days ago, really shows its commitment to sustain the exercise.

The Daily Graphic further finds it a step in the right direction, the plan to supply more fruit trees such as citrus, coconut and mango to Accra and other urban areas to encourage people to plant more trees.

This plan will also sustain interest as proceeds from sale of the fruits can bring an economic turnaround to individuals.

We, however, urge members of the public to desist from cutting down trees, since that will negate the essence of the tree planting.

We enjoin the Ghana Education Service and religious organisations who contributed to the success of the tree planting exercise in June to continue to drive the campaign to grow more trees across the country.