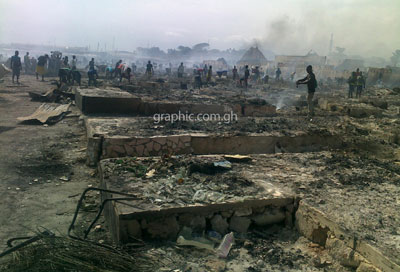 Our acts of omission and commission have caused considerable pain to ordinary people in society. For various reasons, the authorities are unable to act decisively on issues that retard our progress, such as indiscipline at the markets, on the roads, in schools and the communities.

We are amazed that the Ghana National Fire Service (GNFS) is once again advising metropolitan, municipal and district assemblies to incorporate fire safety measures in the construction of markets.

According to the Acting Director of Public Relations of the GNFS, Divisional Officer III Ellis Robinson Okoe, that advice would help reduce the frequent fire outbreaks in some major markets across the country.

There is no doubt that attitudinal change holds the key to the resolution of needless tragedies such as the Kantamanto Market fire outbreak.

We have drawn the attention of the assemblies to naked fires and illegal electricity connections in our markets that have caused fire outbreaks, but the statutory authorities always turn a deaf ear to these matters.

The fire-fighting approach to the problems of society will not help us make progress if we do not hold people accountable for their actions.

We think a combination of public education and the enforcement of regulations will address the ills that continue to plague our country.

We call on the GNFS to carry out an immediate audit of all markets to ensure that they meet all the safety standards. And for once we expect the GNFS to muster the courage to shut down the markets and organisations that do not measure up to standards.

It is sad that common fire extinguishers are not available in many public buildings, just like emergency exits.

In this day and age, Ghana still relies on unscientific ways to do things or at best relies on the act of God in the conduct of public affairs.

The victims of the Kantamanto Market are devastated, but the Daily Graphic does not endorse their militant posture. Nonetheless, we expect the authorities to handle the post-fire trauma and reconstruction programmes with a human face.

We call on the Accra Metropolitan Assembly (AMA) to engage the leadership of the traders in the moves to relocate the victims to other markets in the city.

It helps to involve people in the decision-making process, so that the actions will be owned by those to be affected by the implementation of the programmes.

The Daily Graphic also appeals to the leadership of the traders to talk to the victims to back down on their confrontation with the security agencies that has resulted in the firing of tear gas.

In the same vein, we urge the police and the AMA to carry out their actions at the market with a human face in order not to exacerbate the pain of the victims.

After all, development is about people and the construction of skyscrapers per se will not resolve the abuse of human dignity and civil liberties.

The Daily Graphic, however, calls on the AMA and other assemblies to put in place the facilities to forestall the frequent fire outbreaks in our markets and on other key installations.

Never again should we allow our inaction to cause avoidable pain to our people. And this requires the enforcement of the laws on our statutes.