Why we must digitise our cocoa beans 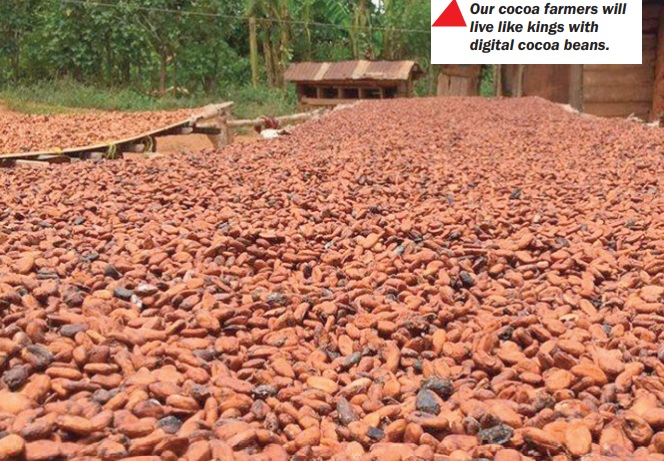 Learn how to build your own business model, think of how you can upscale it while it’s sustainable and has the ability to make profit. You multiply money by buying assets and not living in luxury. Actions make money, good habits keep money and knowledge and experience multiply money (currency).

No one can succeed alone. I used to think you make your own success with your drive ,hard work and making your own luck; that you can be self-made.

This thought process came after I moved from England to Ghana 13 years ago, feeling like a victim and that I had no control over my own destiny.

So it was a progress, but it was attritional. It got me started, but it also limited my progress.

You cannot do everything. You cannot be everywhere. You need great people, great friends, a great team, an extended business network, smart advisors and partners, support, accountability and community.

If all political parties come together with the private sector as a team they can beat any single political party in this world anytime with honesty as their hallmark.

This team can carry Ghana to great heights and can achieve mastery and money with a leader who will inspire the whole nation and turn Ghana into a paradise.

Creating visions, solving problems and making it part of our mission can attract all the best people and can build a team that goes to great heights together.

Interestingly, high importation weakens any country’s currency. So, the Chinese leader did four main things which no democratic leader in Africa can dare try because of the four to eight-year cycle of elections, which we learnt from the West.

Together, the four drivers of change in China - Open China (open the country up for big investments), Competitive China (300,000 foreign businesses creating products for the world markets),Official China (Liberalise parts of the economy whilst maintaining strategic parts) and One World (globalisation, countries highly interdependent) - transformed the way in which businesses operate everywhere.

Managing supply chains, for example, will no longer mean simply seeking low-cost production in China, but tapping the country’s engineering and scientific capabilities for leading-edge research and development.

Goods that are conceived, designed and developed in China will be marketed to the rest of the world.

In view of the above, the Chinese developed these strategies which brought 980 million of its citizens out of poverty, which Africa’s governments are not interested to learn from, because their ‘masters’ will not second it or approve their loans.

President Paul Kagame of Rwanda said, “If the owners of the natural resources go around begging, then you should know there is something wrong with their mind,” and Muammer Gaddafi said,“ President Obama wants to kill me, to take away the freedom of our country, to take away our free housing, our free medicine, our free education, our free food and replace it with American style of thievery called ‘capitalism’, but all of us in the third world know what that means.

It means corporations run the countries, run the world and their people suffer.” Ghana Statistical Service recently announced that Ghana’s inflation reached 23.6 per cent and the central bank of Ghana was baffled by this development.

The corporations of which President Gaddafi was talking about owned almost all the important sectors in our economy. Using oil and gas, mining, banking, manufacturing, telecommunications - both visible and invisible - and many more, foreigners move large funds out of Ghana with the elite sitting quietly, watching and playing blame games.

Let us assume by the end of year, December 31,2022, the total of all commodities exported from Ghana - oil, gold and cocoa - will be worth $19.32 billion, all things being equal.

For this amount earned by exporting these commodities, at least 30 per cent will not remain in the country for development, for the corporations which control all these export companies are owned by these foreign multi-nationals.

Meanwhile in India, software enterprise is the new oil and cocoa beans! In 2020 - 2021,India exported software services worth $133.7 billion, which was higher than Saudi Arabia’s oil exports at $113.7 billion in 2021. The solution to our cocoa for which Ghana does not need high technology to grow is an innovative approach, so that Ghana can realise some US$1.75 trillion.

Ghana must allow the use of blockchain (a digitally distributed, decentralised, public ledger that exists across a network) to digitise all the cocoa trees in Ghana and trade digital cocoa beans.

The elites in Ghana sat down for others to digitalise our gold for trillions of dollars. Digital cocoa beans which will be on blockchain technology will solve the problems of high inflation, low GDP, can stop our government borrowing for almost everything and help the central bank tremendously, if they have sound monetary policies with in-depth understanding of how digital cocoa beans works and the benefits associated with it.

Our cocoa farmers will get huge support from the government and live like kings with digital cocoa beans.

The youth will be interested to enter into cocoa farming.

No wonder the Chinese lust so much after our cocoa and have started cocoa farming.

They know things which our elites have no clue of.