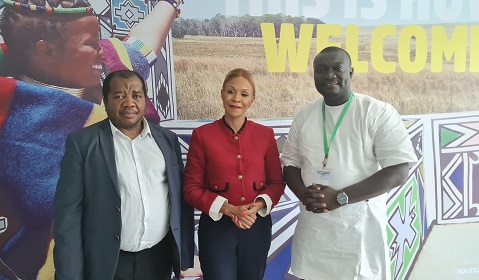 The South African High Commissioner to Ghana, Her Excellency Grace Jeanet Mason has pledged the commission's support to the 2023 edition of the Forty Under 40 Africa Award which will be held in Cape Town, South Africa.

Xodus Communications Limited in May 2022, officially granted the license and the hosting right of the event to Black and White Attorney’s in South Africa at a press conference ceremony held at the Royal Baeng Residence in the Limpopo Province.

Speaking during a courtesy call by the Chief Executive Officer of Xodus Communications, Mr Richard Abbey Jnr, Her Excellency Grace Jeanet Mason said her outfit will support the Pan-African idea of celebrating young achievers on the continent.

She advised that the event should be used as a tool to promote culture and tourism in South Africa.

"I am very honoured to see an entity in my province and country granted the licence and the right to host the 2nd edition of the Forty under 40 Africa", she said.

Her Excellency Grace Jeanet Mason took the opportunity to thank Xodus Communications Limited for such a wonderful initiative to encourage, empower and celebrate influential young businessmen and businesswomen on the continent.

She called on young business leaders under the age of forty to participate in the 2023 edition to experience South Africa.

Meanwhile, Mr Abbey Junior expressed gratitude to the commissioner and her team for their support.

He said, "the uniqueness about 2023 edition is that it will be a five-day event comprising tourism at a safari0, entrepreneurs’ business summit and an exhibition in Pretoria and Gauteng as well as an Awards night in Cape Town", he added.

The Forty Under 40 Africa Award scheme seeks to identify, honour and celebrate a cross-section of the continent’s most influential and accomplished young business leaders under the age of forty from a wide range of industries.