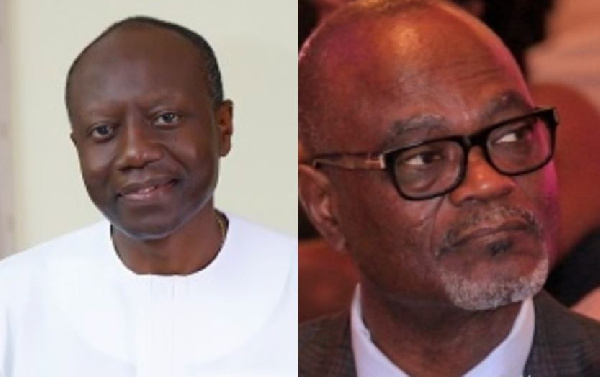 Ghanaian businessman, Dr Kofi Amoah has joined calls for the Minister of Finance, Ken Ofori-Atta to be sacked following the economic challenges facing Ghana and the subsequent decision to go to the International Monetary Fund (IMF) for support.

In a tweet Wednesday (July 6, 2022), Dr Amoah accused the Finance Minister of "killing" several Ghanaian indigenous banks when he could have saved them using nationalistic considerations.

According to him, capital adequacy ratio (CAR) - a measure of how much capital a bank has available, reported as a percentage of a bank's risk-weighted credit exposures - is at its lowest in the country because of decisions taken by Mr Ofori-Atta as Finance Minister.

The Fin Mnster killed several ‘native’ banks, built over many years by CITIZENS

Capital Adequacy ratio of Gh under his watch is the worst in Africa; he killed ‘native’ banks using this ratio of the banks

He tweeted: "The Fin Mnster killed several ‘native’ banks, built over many years by CITIZENS. He cld’ve used nationalistic considerations n saved these banks. Capital Adequacy ratio of Gh under his watch is the worst in Africa; he killed ‘native’ banks using this ratio of the banks. Fire him!".

Dr Kofi Amoah was a majority shareholder of the now-defunct Global Access Savings and Loans which was one of the 23 savings and loans companies whose licences were revoked in 2019 by the Bank of Ghana citing insolvency, management, and fraud in some cases.

There have been increasing calls from particularly the opposition following the decision of the government to engage the International Monetary Fund (IMF) for economic support on July 1, 2022.

The critics blame the Finance Minister for the economic downturn and surging inflation.

The General Secretary of the opposition National Democratic Congress in a recent interview with Graphic Online said the Finance Minister, Ken Ofori-Atta and the Chairman of the Economic Management Team, Vice President Mahamudu Bawumia had displayed an inability to manage the economy and in the process lost the trust of citizens.

He further urged the government to seek-out Ghanaians with hands-on experience of managing the economy to take charge of those roles.

"We need somebody with practical hand-on experience of handling such crises not someone who will be quoting textbooks because in economics you are told that 'all things being equal' but all things are never equal in the real world," Mr Nketiah said.

"They have demonstrated failure in managing the economy, They cannot lead Ghana in this IMF engagements because managing an economy relies on trust and these persons have lost that trust because of their pronouncements on the IMF and the economy in the past.

"The President would help the government and country if he finds another person to manage the Finance Ministry and another person to manage the EMT. Ghanaians with such experience abound and they can find even a technocrat who may not be a politician but can galvanise the confidence of the masses and get all the political actors in government and opposition to look at the issues affecting the economy dispassionately".