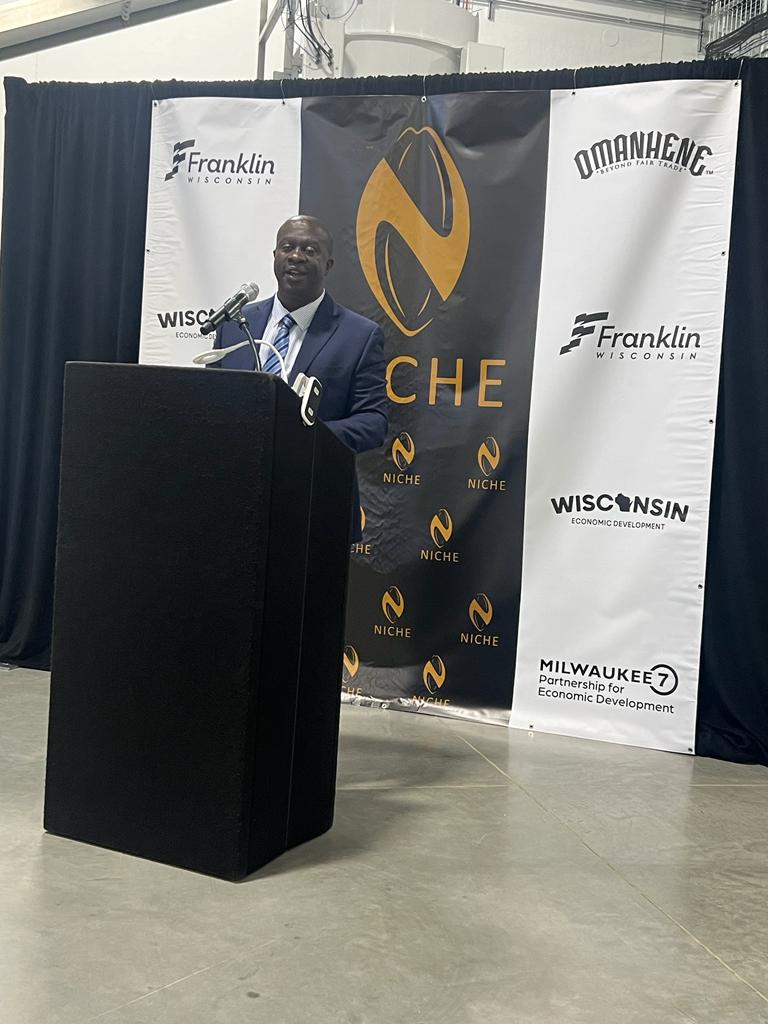 A wholly-owned Ghanaian company, Niche Cocoa Industry, has opened a cocoa processing plant in the American city of Franklin in Tennessee, as part of a global expansion drive meant to consolidate its gains and process more Ghana cocoa beans for the world market.

The company opened the factory on October 4 to help leverage the sizeable American market and its huge potential to develop both semi-finished and finished products cocoa products for the rest of the world.

The plant is a partnership between Niche Cocoa and Omanhene Cocoa Bean Co., of Milwaukee and was commissioned by the United States of America (USA) Under Secretary of Commerce for International Trade, Marisa Lago, officials of the Wisconsin Economic Development Corporation (WEDC), among others.

It marked the first time that Niche, which is the largest private sector cocoa processor in Ghana, has entered the United States of America.

The company already has operations in Germany.

A statement from Niche Cocoa said the USA operations will be based from the Franklin Business Park location, where the company would operate from a 44,000-square feet space.

It said the company would import cocoa cake, which will be pulverised to create cocoa powder for nationwide distribution.

It said it would also manufacture finished chocolate made with cocoa butter and cocoa liquor produced in Ghana from the country’s premium cocoa bean.

At the commissioning ceremony, the U.S. Under Secretary of Commerce for International Trade described the investment as historic, noting that it was an unmistakable signal to other companies across Africa and around the world that the USA was open for business.

“The Biden Administration is strengthening our relationships abroad to create jobs and prosperity at home.

“Niche’s investment here is more than just a new facility—it is an investment in American workers and in the Franklin community,” Madam Lago said.

She commended the Managing Director (MD) of Niche Cocoa, Edmund Poku, and the USA Department of Commerce for helping to facilitate the investment.

The MD of Niche Cocoa Industry said at the commissioning that the size and nature of the USA market made it an obvious choice for Niche in its global expansion drive.

Mr Poku explained that the company had successfully established itself as a formidable business in Ghana and in the eyes of some international customers.

He said the company did that by mainly extracting high-quality semi-finished products from the cocoa bean for sale to key markets outside Ghana.

“The value within the supply chain comes from adding more value upstream and given the market dynamics, most of those big markets are outside of the African continent.

“Niche is proud, of not only of the quality of the product it has delivered but also of the flavor and taste of the Ghanaian cocoa bean, which is the world’s most premium bean.

“The USA became a natural choice for expansion, given the market size and potential to develop both semi-finished products and also selling more products up the value chain such as chocolates,” Mr Poku said.

“Taking into account proximity to customers, logistics, high-quality human capital, and a business-friendly environment, Wisconsin was a great choice.

“We know how to build factories and so we could do that anywhere but the partnership between what we know how to do and what Wisconsin can offer Niche to succeed in our next chapter is what has brought us to the state,” he explained.

The Secretary and Chief Executive Officer (CEO) of WEDC, Missy Hughes, said her outfit was excited about Niche’s presence in the state.

Madam Hughes said the food and beverage sector was one of the state’s economic drivers and Niche Cocoa’s decision to locate there complemented the state’s existing businesses and opens new possibilities for collaboration in the supply chain.

The Mayor of the City of Franklin, Steve Olson, said the city was happy to welcome Niche Cocoa to the Franklin Business Park, where it joined several other well-known food processors and other manufacturers Mr Olson said Niche Cocoa continued Franklin’s long history of welcoming international corporations to its fast-growing community.