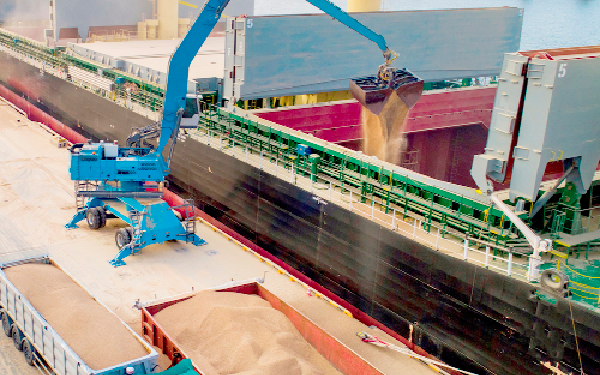 The maritime industry is set to witness a major rebound after months of turmoil as a result of the Russia/Ukraine war.

Russia and Ukraine last Friday (July 22) signed separate agreements with Turkey and the United Nations, clearing the way for the export of millions of tonnes of desperately needed grains and fertiliser across the Black Sea.

The deal is to establish a humanitarian maritime corridor to allow ships to export critical cargoes of grain and foodstuffs from Ukraine.

The long-sought deal ends a wartime standoff that has threatened food security around the globe. The agreement was signed in Istanbul, Turkey after several weeks of negotiations.

The UN plan will enable Ukraine, one of the world’s key breadbaskets, to export 22 million tonnes of grain and other agricultural goods that have been stuck in Black Sea ports due to Russia's invasion.

The Secretary General of the UN, Antonio Guterres, described the move as “a beacon of hope” for millions of hungry people who have faced huge increases in the price of food.

He said there should be no doubt that this was an agreement for the world.

It would also help stabilise global food prices which were already at record levels even before the war – a true nightmare for developing countries.

“Specifically, the initiative we just signed opens a path for significant volumes of commercial food exports from three key Ukrainian ports in the Black Sea – Odesa, Chernomorsk and Yuzhny.

“The shipment of grain and food stocks into world markets will help bridge the global food supply gap and reduce pressure on high prices," the UN Secretary General added.

Although international sanctions against Russia did not target food exports, the war has disrupted shipments of Russian products because shipping and insurance companies did not want to deal with Russia.

The agreement will ensure a UN-led joint coordination centre to be set up in Istanbul staffed by officials from Ukraine, Russia and Turkey to run the plan, including scheduling cargo ships’ arrivals and departures.

Inspectors representing all parties at the Bosporus in Turkey will search vessels entering and leaving Ukrainian ports to ensure no weapons or soldiers are on board.

Under the deal, all activities in Ukrainian territorial waters will be under authority and responsibility of Ukraine and the parties agree not to attack vessels and port facilities involved in the initiative.

Should demining be required to make the shipping lanes safe, a minesweeper from another country could clear the approaches to Ukrainian ports.

The Secretary-General of IMO, Kitack Lim, who attended the signing ceremony in Istanbul on Friday (July 22), expressed pleasure about the signing of deal to allow shipments of essential commodities via the Black Sea.

"I am very pleased that all parties have reached an agreement on the way forward for ships to safely transport much-needed grain and other commodities through the Black Sea.

“This agreement would not have been possible without the spirit of cooperation by the countries involved and the leadership shown by UN Secretary General António Guterres in proposing this initiative," IMO Secretary-General Lim said.

He said the safety of ships and seafarers remained the IMO’s topmost priority amid the war.

He said the IMO instruments, including the International Ship and Port Facilities Security (ISPS) Code, underpinned the agreement for safe and secure shipping through the Black Sea.

“I commend the efforts of all involved, particularly the IMO member States - Russian Federation, Türkiye and Ukraine,” he said.

African leaders whose countries import food and fertiliser from Ukraine and Russia also welcomed the deal, with the President of South Africa, Cyril Ramaphosa, saying, “It has taken much too long.”

Ukraine is one of the world’s largest exporters of wheat, corn and sunflower oil, but Russia’s invasion of the country and naval blockade of its ports have halted shipments.

Some Ukrainian grain is transported through Europe by rail, road and river, but the prices of vital commodities such as wheat and barley have soared during the war.

The Foreign Secretary of the United Kingdom (UK), Liz Truss, applauded Turkey and the UN for brokering the agreement.

“We will be watching to ensure Russia’s actions match its words. To enable a lasting return to global security and economic stability, the Russian President must end the war and withdraw from Ukraine,” she said.