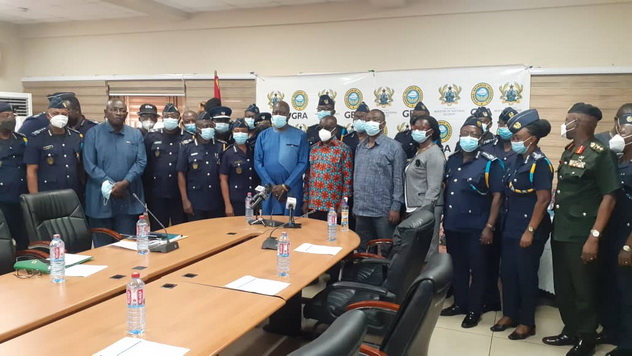 Revenue leakages, he said, occur with the complicity of some staff of the GRA who he described as the “few bad nuts.”

The actions of these “fee bad nuts tend to obscure and negate the numerous positive works of the Authority. Now more than ever, the GRA and for that matter, Ghana, need men and women of integrity to block leakages in the system. To succeed in doing this, the Authority must do all it can to root out those bad nuts,” said Mr Kan-Dapaah.

The government, he said, had implemented measures such as the Immediate Tax Force (ITF) and the Revenue, Assurance and Compliance (RACE) Initiative to complement the efforts of the GRA in blocking revenue leakages, yet the leakages have persisted due to limited cooperation and collaboration between the GRA and security agencies.

“The coming into force of the National Security Strategy, would avert this problem by promoting multi-agency cooperation toward safeguarding the economic security of the State,” he said.

That, he explained was because the strategy would “place the work of the GRA at the very heart of all security considerations of the State, implying an enhanced cooperation between State Security and Intelligence Agencies and the GRA in preventing leakages.”

He said it would also open new channels of communication among actors tasked with the duty of enhancing domestic revenue mobilization and remove barriers that militate against efficient revenue collection.

The failure of the GRA to mobilize the needed revenues for government, he pointed out, would serve as the catalyst to plunge the nation into an age of discord and possibly truncate Ghana’s long years of relative peace and stability in the West African sub-region.

He said developments which were recorded in the country such as increased agitations for the improvement in the living conditions of citizens leading to the emergence of pressure groups, and the recent gridlock in Parliament over the introduction of the E-levy, shed light on the magnitude of the economic security threats that confronted the country.

Mr Dapaah said these economic security threats were tightly connected to the ability of the State to generate revenues and tackle the socio-economic problems facing the country.

“In pre-pandemic times, it was prudent for developing countries including Ghana to rely on external borrowings to augment shortfalls in domestic revenues generated for development.”

Today, he said, that alternative was no longer attractive due to rising debt levels and the ballooning of deficits occasioned by the COVID-19 pandemic.

He said many countries in sub-Saharan Africa were exploring ways to widen the tax net and increase domestic revenue mobilization as the only potent means to restore their economies to normalcy and that Ghana was no exception, even though these measures sometimes imposed a certain degree of discomfort on the citizenry.

Commitment
President Nana Addo Dankwa Akufo-Addo in June, 2021 launched the National Security Strategy blueprint to enable stakeholders in the security sphere to deal effectively with existing, new and emerging threats to the country.

He said the workshop would offer the GRA the opportunity to appreciate the National Security strategy better and help them address any threats that would impede their work.