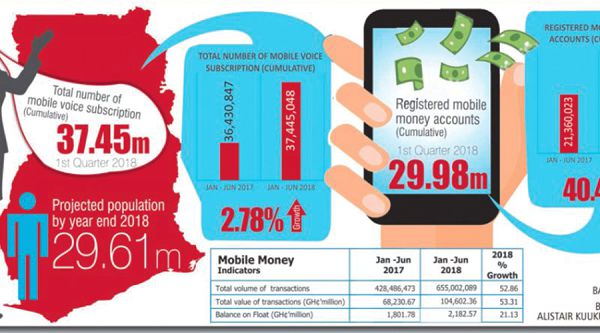 The growth of mobile money (MoMo) transfers in Ghana has taken many in the financial sector by surprise as many players in the industry did not envisage the extent of its impact in the country’s payment systems only a decade ago when the technology emerged.

But today, the usage of MoMo in non-cash retail payments has overtaken the traditional cheques, which used to record the highest transactions in terms of value and volume, ushering in a new period of cashlite regime that can phase out the use of cheques in the country.

The Bank of Ghana (BoG) reports that as of September last year, there were over 31 million mobile money accounts with a little over 12 million active accounts with over 350,000 registered agents and over 190,000 active agents.

In terms of value, MoMo transfers increased to GH¢160 million by the end of the third quarter of 2018 compared with GH¢109 million during the same period in 2017. The BoG also recorded mobile money interoperability between May and September, 2018 at GH¢104.85 million and 1,118,315 in terms of volume.

The data, therefore, suggest that MoMo transfers have resulted in financial inclusion for the unbanked in the country through the efforts of the three main players in the budding industry, MTN, Vodafone and AirtelTigo.

With their partnership with retail banks and lately financial technology companies, MoMo customers to a large extent have enjoyed an efficient non-cash retail payments system.

However, the introduction of mobile money has suffered from attempts at defrauding the system by malicious actors. In 2017, one of the telecommunication companies reported that it received about 365 complaints of fraud monthly from its subscribers.

The scale of attempts at fraud are staggering as the telco operator also indicated that it filtered all the SMS messages that passed through its platforms and blocked more than 400,000 scammed messages on a daily basis from reaching their recipients.

However, the Ghana Police Service Cybercrime Unit admits that it is only able to investigate and prosecute just about 10 per cent of the cases reported to it due primarily to the use of fake identities to register SIM cards.

Estimates of analysts also suggest that about 50 per cent of all mobile money subscribers have either been targeted or experienced one form of fraud or another.
This should encourage operators to enforce the rules governing SIM registration in the country.

A simple adherence to this thought-through requirement alone can save many the burden of battling with fraudsters in the MoMo space.

With these facts in mind, individuals must also adhere to the recommendations of experts on how to prevent fraud through MoMo and ensure the sanctity of transaction in Ghana.

Highly among the top recommendation is that, never share PIN with anyone, including mobile money agents or workers of MTN.

One must ensure at all times that one is the only individual with access to the PIN.

The PIN, which is ones secret number, should not be easy to guess by anyone at all.

Not even a trusted friend should be able to guess ones secret number, especially in these times of fraud.

The combinations must be difficult to guess.

When depositing money into individual accounts, one must always wait for confirmation as some agents take advantage of the impatience of customers to defraud them.

One must also be mindful of the text messages and calls they respond to.

Fraudulent individuals send out bulk SMS to MoMo users disguised as one coming from the operators of the MoMo service.

All SMS from operators are sent through their official short code and not through standard phone numbers.

For instance, MTN allows customers to call the Toll-Free number: 100 to report any fraudulent activity.