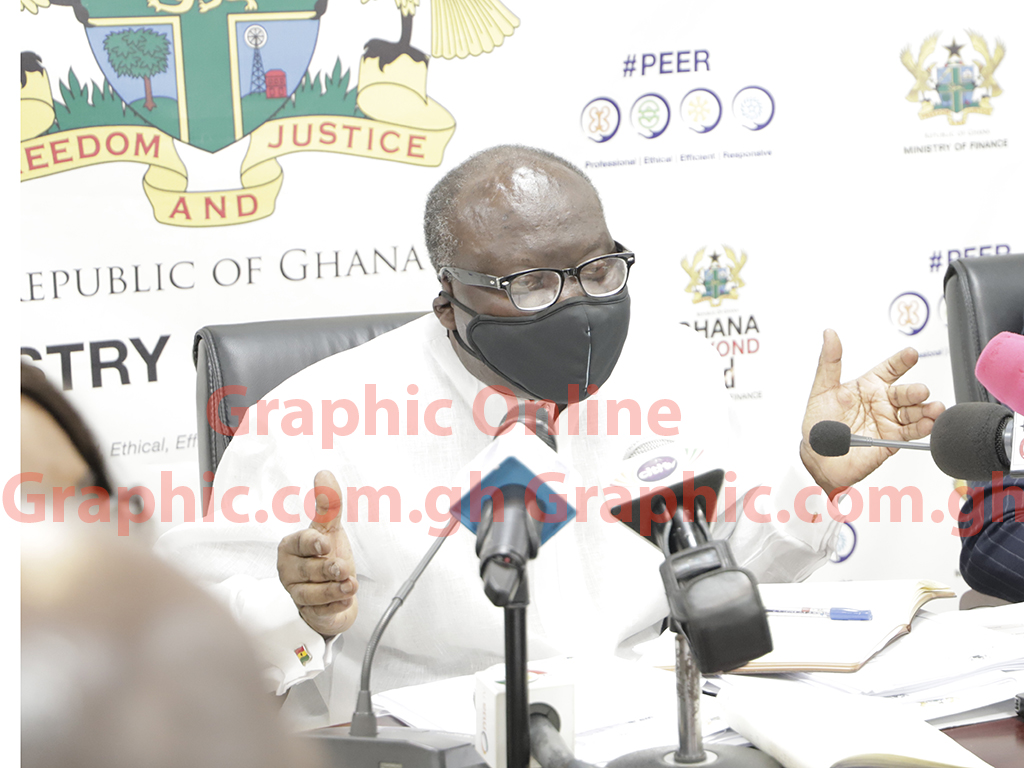 The government has made concessions in the 2022 Budget Statement as part of consensus-building around the policy document.

The concessions include the exclusion of mineral royalties collateralisation in the Agyapa Royalties deal, the earmarking of about GH¢10 million to complete feasibility studies and engineering for coastal communities adversely affected by tidal waves, as well as the introduction of measures to avert any hardships that will result from the planned reversal of the discount policy on benchmark values.

The Minister of Finance, Mr Ken Ofori-Atta, who disclosed this at a press conference yesterday, added that he had written to the Speaker of Parliament, formally communicating the details of the modifications in response to emerging concerns by all stakeholders, including the Minority in Parliament.

He said the government would also revise the budget’s position on the Aker Energy transaction to reflect a July 6, 2021 resolution of Parliament.

“Relating to the Aker Energy transaction, we shall amend Paragraph 829 of the 2022 Budget on the acquisition of a stake from Aker Energy and AGM Petroleum by GNPC to reflect the resolution of Parliament, dated 6th July, 2021, that ‘the terms and conditions of the loan for the acquisition of the shares shall be brought to Parliament for consideration, pursuant to Article 181 of the Constitution’,” he said.

Supported by the Minister of Information, Mr Kojo Oppong Nkrumah; the Minister of State at the Ministry of Finance, Mr Charles Adu Boahen; deputy ministers of Finance and other officials of the ministry, Mr Ofori-Atta, however, noted that the government and the Minority were yet to reach consensus on the electronic transactions levy (E-Levy), which announcement on November 17 generated heated controversies in and outside Parliament.

The minister expressed optimism that the various concessions reached, which had been communicated to Parliament, would pave the way for the relevant committees of Parliament to reflect on the modifications in the 2022 Budget, as well as begin considering the various estimates of ministries, departments and agencies (MDAs).

Although Mr Ofori-Atta did not say what the government was prepared to trade-off with regard to the introduction of the E-Levy, he said it was confident that a consensus would be reached between both sides for the Appropriation Bill of 2022 to be passed before Parliament rose on December 17.

“We believe that the concerns raised in Parliament on the 2022 Budget should be resolved during the discussions of the Budget Estimates of MDAs, other government obligations and bills at the committee level in Parliament as we have always done. Indeed, there have been occasions that Parliament, through the Finance Committee, had revised fiscal measures,” he said.

He added that there had been several instances when estimates of some MDAs had been revised to reflect recommendations of the committees of Parliament, saying: “It is not uncommon for the allocations in the appropriations to change to reflect the discussions at the considerations stage.”

The controversy that surrounded the 2022 Budget bordered on concerns by the Minority on the Agyapa Royalties deal, the Aker Energy transaction, the lack of budgetary allocations to victims of the Keta tidal wave disaster, the E-Levy and the proposed reversal of the 50 per cent discount policy on the benchmark values.

Ghana needs the 2022 Appropriation Bill to be passed before the end of the year to ensure that public spending continues uninterrupted.

Mr Ofori-Atta said the national budget remained the single most effective tool to address the greatest challenges of the nation.

“As a country, we cannot allow such a strategic national tool to be held hostage by partisan interests, especially when the consideration stage offers every opportunity for such redress,” he said.

The Finance Minister added that the 2022 Budget had an added layer of significance for the government, as it drove forward “the great economic mission of our time — building a sustainable entrepreneurial nation”.

He pointed out that the budget sought to address “the triple helix albatross of our time — high unemployment, high debt and inadequate infrastructure — even as we pursue our agenda for increased social mobility and justice for all”.

The minister said the 2022 Budget had outlined measures to tackle the unemployment menace, which was said to affect about 11 million people.

“Like the senior high school programme, the YouStart will have an equally momentous impact on our society — a game changer in social mobility, decent jobs and having dignity. This programme is designed to provide relevant skills and access for long-term affordable,” Mr Ofori-Atta said.

He also emphasised the need for the country to increase revenue generation by broadening the tax net, stating that the E-Levy was the country’s best attempt to broaden the tax base and increase the tax-to-gross domestic product (GDP) ratio to 20 per cent.

“We are determined to enhance domestic revenue mobilisation. The essence of our proposal on the E-Levy is to widen the tax net and generate the required revenue to support entrepreneurship and youth employment, build our infrastructure, especially roads, and reduce our debt,” Mr Ofori-Atta stated.

To lessen the impact of the E-Levy on consumers and subscribers, especially the more vulnerable, he said the government would work with all the stakeholders, including the telecommunication companies (telcos) to ensure that the all-inclusive cost was reduced by 0.25 percentage points.

“We shall also ensure that administrative measures will be taken to avoid attempts at evading the E-Levy taxes,” Mr Ofori-Atta stressed.

The Minority Leader should please hold his horses on e-Levy

AUDIO: How I was convinced to accept one percent E-Levy - Haruna

Forget about the e-levy; It’s no time for jerky manoeuvres – Kwame Pianim