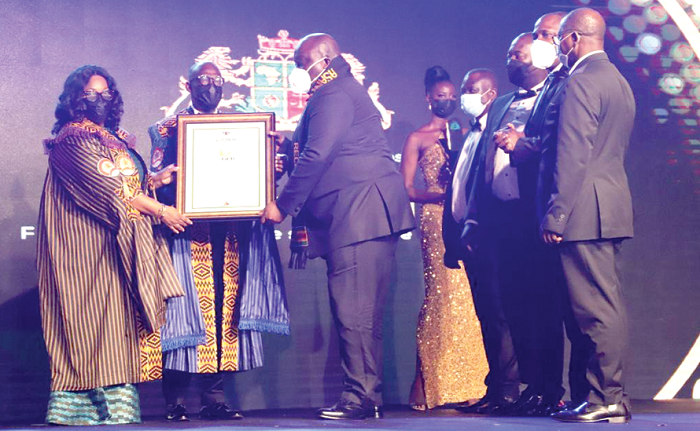 Mr Kofi Adomakoh, MD of GCB Bank, receiving the award from the Chairperson of the Governing Board of MEF, Ms Grace Amey-Obeng Pictures: Emmanuel Baah

The Managing Director of GCB Bank Ltd, Mr Kofi Adomakoh, has described the award picked by the bank at the Millennium Excellence Awards as a challenge to his administration to move the bank to a higher level.

He said the conferment of the award on the bank was an indication that the bank was doing something good and that people were watching whatever it was doing.

In an interview with the Graphic Business, Mr Adomakoh noted that to be the leading bank in Ghana “means that you are going to be challenged a lot and you must do things more positively”.

“This award inspires me and my bank and all the staff that people are still watching and observing best practice. So this award motivates me to lead in a responsible manner and to get GCB to be a centre of excellence when it comes to banking,” he said.

Mr Adomakoh said the agenda was to make GCB the most dominant bank in Ghana and “we are on course to making GCB the centre of excellence when it comes to financial services and to see GCB go beyond the borders of Ghana and venturing into regional banking by taking advantage of the African Continental Free Trade Area (AfCFTA)”.

He said the objective was to get the best for the bank, its shareholders and the staff.

The award scheme honours individuals and businesses that have excelled in their various fields of endeavour over the years and encourages them to do better.

The event was held under the patronage of the Asantehene, Otumfuo Osei II, who is the Life Patron of the foundation.