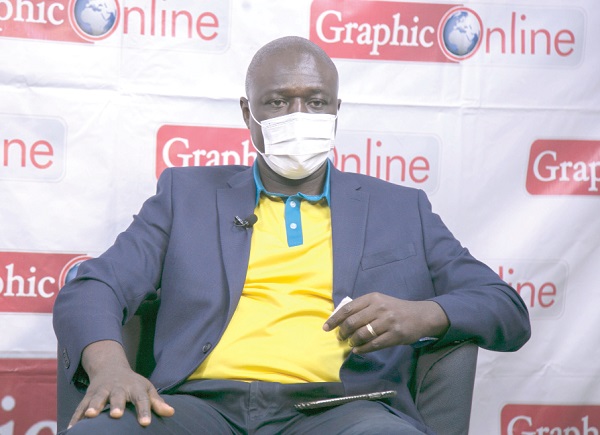 The amount of money sent from one mobile money account to another enjoyed tremendous growth in the first half of the year, during which the outbreak of the coronavirus disease (COVID-19) pandemic forced most people to reduce the usage of cash for financial transactions.

The General Manager of Mobile Money Limited, a subsidiary of MTN Ghana, Mr Eli Hini, said last Monday that the amount of money sitting on all mobile money accounts (mobile money float) in the country rose from GH¢3 billion, as of June last year, to GH¢4.5 billion as of June this year.

Mr Hini said this when he took his turn on GraphicTalks360, a live Facebook interview session specially created by the Graphic Communications Group Limited (GCGL) to host prominent personalities to discuss issues of national concern.

It was moderated by the Assistant Editor of the Graphic Business, Mr Charles Benoni Okine.

Mr Hini added that the value and the volume of transactions, the number of accounts, as well as the number of agents offering mobile money services in the country, had all grown substantially within the period.

He attributed the strong growth to the pandemic, which many experts say is an opportune catalyst for Ghana's march towards a cash-lite society – an economy where electronic transactions outweigh cash-based ones.

He added that the strong growth in the float meant that more money had moved from the unbanked segment of the market to the financial sector.

Per Ghana’s laws, the mobile money floats are hosted by the banks, as opposed to the situation in some jurisdictions, such as Kenya, where the mobile telecommunication companies host the float.

Mr Hini said the growth in active mobile money wallets (accounts) was on the back of incentives introduced by the telecommunications companies to cushion the public against the impact of the COVID-19.

"That represents about 20 per cent growth and I can tell you that we saw the bulk growth after we had put in place the COVID-19 incentives," he said.

In March, when the pandemic first struck, the telecommunications companies waived the charges on mobile money transfers for amounts up to GH¢100.

They also raised the limit on funds that could be sent around as part of measures to help reduce cash-based transactions in favour of electronic transactions.

The waiver has since been extended to September.

It rose from 180,000 agents to 263,000 agents, thereby eclipsing the number of branches from which banks, savings and loans and microfinance companies operated.

He said it represented a 46 per cent growth, something he described as significant.

He said the transaction volumes also rose significantly, signifying that more people were relying on mobile money for transactions.

He advised customers to jealously guard their transaction details in order not to expose them to scammers.

Mr Hini said while the telecommunications companies, especially MTN Mobile Money, were doing their best to protect the system against fraudsters, customers owed it a duty to help protect themselves and their wallets against infiltration.

He said the company was investing about $2.5 million in an artificial intelligence system that would secure its platform against fraudsters.