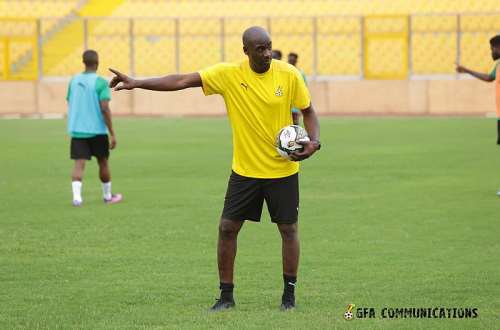 Africa's pride, Ghana, and perennial dark horses, Switzerland, have a lot in common, making their clash at the Baniyas Club Stadium in Abu-Dhabi at 10a.m. today quite interesting.

Underneath their dramatic World Cup qualification fairy tales lies a disturbing quarter-final history both teams are yearning to obliterate in Qatar. Not only that, both Ghana and Switzerland are handled by young former internationals who want to make a mark at their maiden Mundial appearances.

Moreso, 48-year-old Murat Yakin of Turkish descent has been forced to experiment with substitute goalkeepers in today's game, just as 47-year-old Otto Addo will gamble between Lawrence Ati-Zigi and Abdul Manaf Nurudeen to determine his first choice goalkeeper ahead of the World Cup.

Incidentally, Ghana lost its first choice goalkeepers, Joseph Wollacott and Richard Ofori, through last-minute injuries, while Yakin had to include four goalkeepers in his 26-man squad due to injuries suffered by his two favourite shot-stoppers.

The only difference is that the iconic Yann Sommer of Borussia Monchengladbach, who kept six clean sheets out of qualifying matches, made the final team despite being rendered inactive by a torn ankle ligament since October. However, his usual back-up, Yvon Mvogo, had to be sacrificed following a knee injury he suffered during Lorient's defeat to PSG on November 6.

Midfield battle
Interestingly, the main attraction today will be the midfield battle between Arsenal's duo of Thomas Teye Partey and Granit Xhaka, who is in a form of his life. It will not be surprising to see both players lead their respective teams in this final World Cup warm-up exercise.

This is because both Otto Addo and Yakin might parade their starting line-ups in order to rehearse their favourite formations ahead of their opening group matches on November 28. Coincidentally, the Black Stars will open the tournament against a European opposition in Portugal, while Switzerland face an African opponent in Cameroon, explaining the crucial nature of this morning's fixture.


Even more importantly, the 4-2-3-1 formation of the Swiss is similar to Portugal's 4-3-3 system, hence will help the Stars technical team to know how to neutralise them with their most preferred 3-5-2 formation. This clearly indicates that today's clash will be decided from the midfield.

But it is needless to say that the Ghanaians face a tough test against the Nati who caused an upset in the qualifiers with an unbeaten run which saw them topping Group C and pushing European champions, Italy, into a disastrous playoff against North Macedonia which cost them a place in Qatar.

Trial for new players
In that case, Coach Addo will avoid another experiment which cost him dearly against Brazil last September by putting his best foot forward this time round.

Therefore, he is likely to reshuffle his starting line-up by introducing sensational defensive midfielder, Salis Abdul Samed, and Kamal Sowah on the right side of attack to support Inaki Williams and Jordan Ayew. The heart of midfield is expected to be complemented by Partey and Mohammed Kudus, while Denis Odoi, Alexander Djiku, Daniel Amartey, Mohammed Salisu provide the needed cover for goalkeeper Ati-Zigi.

Interestingly, Ghana stand a chance of meeting either Brazil or Switzerland again in the second round in case they progress from Group H as the two teams are highly favoured to pull through in Group G. And as fate would have it, both Ghana and Switzerland are scheduled to play their respective group matches on the same dates.

Like the Ghanaians, the Swiss hope to improve upon their quarter-final berth as far back as 1954 by repeating their great form which saw them force a barren draw against the Azzurri in Rome during the qualifiers. The confidence of the Nati would be further buoyed by their impressive penalty shootout victory over defending world champions, France, at the Euro 2020 last 16 stage.

Again, scoring 15 goals in eight qualifying matches, an average of two goals per match, makes the Switzerland attack a threat to any defence.

After opening the year with five straight losses, the Nati bounced back strongly with three wins in a row against Portugal (1-0), Spain (2-1) and the Czech Republic (2-1) to restore confidence among their fans. Aside from Xhaka, Coach Yakin boasts of seasoned players such as Manuel Akanji of Manchester City, Xherdan Shaqiri of Chicago Fire in the Major League Soccer.