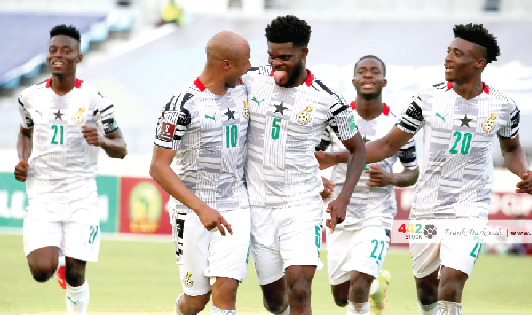 That's the appraisal of Coach Milovan (Milo) Rajevac after just three weeks in office as head coach of the Black Stars.

When the Serbian was brought in last month and tasked to find quick-fix solutions to Ghana's stalling World Cup campaign, not many believed he could turn things around for the team whose performance had been uninspiring under former coach, Charles Akonnor.

However, with no luxury of time, Rajevac assembled a team of players he had only watched on video, apart from Skipper Andre Ayew and Jonathan Mensah, gave them a sense of belief and direction and guided them to back-to-back victories against Zimbabwe to keep the team's hope alive.

Ghana's 1-0 victory over Zimbabwe in Harare last Tuesday was a critical test for the team despite an emphatic 3-1 win against the Warriors in Cape Coast days earlier.

For many Ghanaians, the team's response in the reverse fixture was a manifestation of the immediate impact made on the team by the new technical handlers.

Except for a few occasions when young goalkeeper Jojo Wollacott looked a bit jittery and heart-stopping moments when there was lack of coordination in the heart of Ghana's defence, the Black Stars generally took charge of the match and took care of business.

Although he had spent not more than a week with the players in camp, it was not difficult to see that the 67-year-old Serbian left his imprint on the team as they played with a sense of urgency and purpose, a recognisable pattern and with every player working hard for the deserved victory, especially last Tuesday.

Commentaries on the match were very positive with the coach being praised for how the team was shaping up.

Rajevac himself acknowledges that the team has what it takes to accomplish the mission. "We can still be in contention. The results are most important at this time.

"Our confidence is getting high and in the next two matches, we must prove a point," he said after last Tuesday’s win which earned the Black Stars six points from two matches.

During his first term, the Serbian executed a near perfect qualifying campaign but this time round, the qualifying campaign looks more challenging not just because he inherited a team he did not build from the scratch, but also because the 10 group winners will go into a final phase of playoff to determine Africa's five representatives to next year's World Cup in Qatar.

Skipper Ayew also acknowledged that every point was very important in the campaign so far and as a result, the players must stand up and be counted.

"There's a lot of work to be done. If we want to go to the playoff, we need to win the next two games," he said last Tuesday.

The Serbian has proved again that a coach can inspire his players, give them new direction and make a difference in a team.

Strong on tactics, the coach demands a lot from his players and is noted for sacrificing big name players and creating a lot of competition among his charges.

This was evident when he fielded young goalie Wollacott in the two matches and used former Black Satellites top striker, Abdul Fatawu Issahaku ahead of some more experienced players in the first leg, as well as substituting Jordan Ayew in both matches when his output was diminishing.

Since his arrival, there is high sense of discipline and commitment among the players in camp, evidenced by the manner in which the top stars Andre Ayew, Mohammed Kudus, Abdul Baba Rahman, Daniel Amartey and Thomas Partey in particular stepped up to the plate in the two matches.

It is that renewed sense of duty that must carry the team through the rest of the campaign if they are to maintain their newfound winning spirit.

Next month, Rajevac and his team will be back on the road to wrap up the second phase of the qualifiers with an away match against Ethiopia on November 11 and a potential group decider with South Africa three days later in Cape Coast.

With group leaders Bafana Bafana at arm's length, the Black Stars cannot afford to drop their guard in any of the remaining matches but must adopt a one-game-at-a-time approach to the campaign and not treat one as more important than the other.

On account of the team's progress under Rajevac's guidance, they look good bet to beat the Walias of Ethiopia at the Bahir Dar Stadium and exact revenge against the Bafana Bafana next month to win the group and progress to the playoffs.