Qatar 2022: See how injured Joojo Wollacott was welcomed at the Black Stars camp 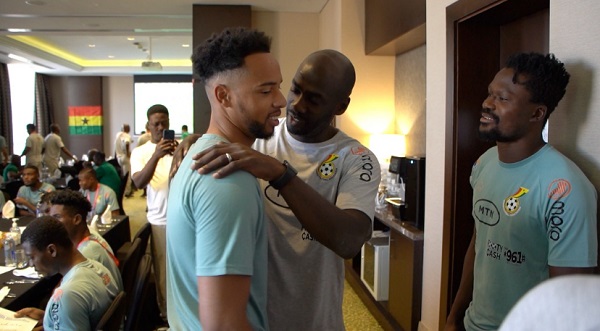 Injured shot-stopper Joojo Wollacott has joined his Black Stars teammates at the team hotel in Doha ahead of their Group H opener against Portugal tomorrow.

The Charlton Athletic goalie was influential in qualifying for the FIFA World Cup "Qatar 2022" but a late injury sustained at his club side ruled him out of of Coach Otto Addo's 26-man squad for the Mundial and his first World Cup appearance.

However, he has joined his teammates to motivate and support them ahead of the Portugal tie.

Wollacott, 26, was welcomed by the GFA President Kurt Okraku as well as the playing body and technical team members of the Black Stars.

He was seen explaining to team members the nature of the injury sustained to a finger on his left hand.

Wollacott had an operation on his left finger on November 17, 2022, and had already begun rehabilitation.


He is expected to recover from the setback before the end of the calendar year.

The Black Stars are in Group H alongside Portugal, South Korea and Uruguay.