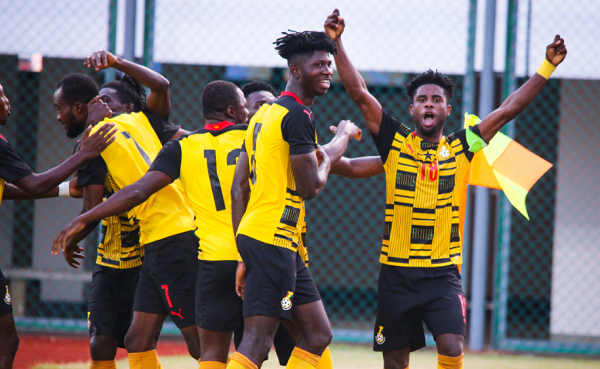 Ghana will play Nigeria in the final round of qualification for the Championship of African Nations (CHAN) Algeria 2022 after defeating Benin 4-0 on aggregate in a preliminary round qualifier last Saturday in Cotonou.

The Black Galaxies defeated Benin 1-0 in the second leg of their preliminary round qualifier to book a date against rivals Nigeria courtesy a goal from Daniel Afriyie Barnieh in the 82nd minute.

The Galaxies held a three-goal advantage heading into the second leg after winning the first leg 3-0 at the Cape Coast Stadium last week.

Ghana last qualified for the CHAN in 2014.

Trailing 3-0 from the 1st leg, the Squirrels showed desire in the opening stages of the match seeking to upset the Black Galaxies but the calm Ghana defence was up to the task as they curtailed the onslaught that was thrown at them.

Afriyie Barnieh was the first player to get a decent chance for Ghana but was let down by his final touch as the Squirrels cleared their lines.

Winger Jonah Attuquaye was later put through by Captain Gladson Awako in the 17th minute but the Legon Cities man saw his shot punched out by Benin goalkeeper Serge Obassa.

The Squirrels equally matched the Galaxies in midfield but Razak Kassim and Dominic Nsobila did a wonderful job by providing the needed shield for the backline.

Salim Bawa fired from the distance with the aim of catching Ibrahim Danlad off guard but his shot was well read as he soared high to make a good catch.

With clear cut chances eluding both teams, the first half ended goalless at the Stad l'Amitie in Cotonou.

Back from recess, Benin again started on the front foot but were goal shy as they failed to take the chances that came their way.

Imoro Ibrahim was later substituted after picking a nose injury in the 71st minute. The left back crashed with an opponent resulting in a nose injury and was replaced by Dennis Korsah. Coach Annor Walker brought on David Abagna for Gladson Awako while Umar Basiru also came on for Evans Osei Wusu.

The substitutions energized the Black Galaxies as the team looked more composed in the closing stages of the encounter.

With eight minutes of proceedings remaining, Dennis Korsah sent an incisive ball to Umar Basiru - who dribbled past two Benin defenders before cutting a lovely ball across the face of goal to set up Daniel Afriyie Barnieh who smashed home for the opener.

Ghana made the last substitution in the 86th minute as Suraj Seidu came on for Jonah Attuquaye as the Black Galaxies held on to win 1-0 in Cotonou to seal through on a 4-0 aggregate.